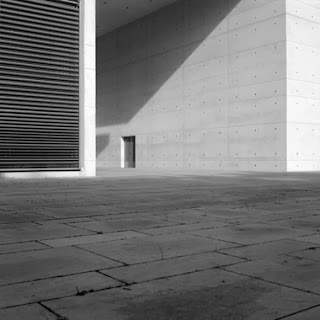 Mike Majkowski - Why is there something instead of nothing? (Bocian)

"On "Belt of sand", Majkowski plays, for 15 minutes, an extraordinarily rapid arco line (has to be 6-8 notes per second), usually a fairly high pitch, over some low, rumbling and knocking notes. Whether these latter are a kind of "by product" of the bowing or are produced independently, I don't know. Sometimes it seems like the bowed notes tumble into the more percussive ones. The entire piece is this one sustained activity, with all the perturbations and presumably accidental variations that occur. It's the rare piece wherein furious activity creates an odd sense of calm surface; well, "calm" would be the wrong word, more like a membrane that's vibrating in a pattern that flows from predictable to turbulent. It's a tour de force on the one hand but, crucially, one is always aware of the music produced instead of being distracted by the producer. A great piece.

"A shadow of silver dipped in gold" is quite different, though just as single-minded and rewarding. A bowed, descending, two-note motif, medium-slow, and a six or seven second period between to hear the fading resonance is played for the first half of the work, about nine minutes. It's a very attractive little nugget on its own, both the grain of the notes and the lingering echo they leave in the air. I'm sure Majkowski's intent is to play them uniformly, but the automatic difference in each iteration make for fascinating listening in and of themselves. At that halfway point, he switches to a single, strongly plucked note. Again, there are about six seconds between each attack. That's all. And it sounds great. Each echo contains at least three distinct pulses or pitch variations as it fades making for utterly absorbing listening.

A wonderful, unusual and extremely focussed release--have turntable, give a listen.