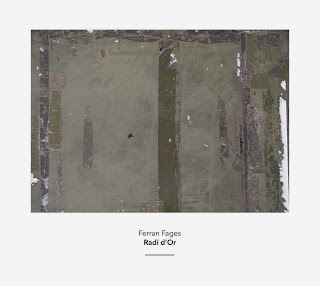 A piece that's more unusual and, I suspect, more involved than is apparent at first blush. A single, 36-minute work, it seems to be a composition though I guess one could be forgiven, if not paying close attention, for thinking of it as just another fairly quiet, steady-state improvisation but there's more going on. I wish I had the score to check on this; for that matter, I wish I could figure out a translation of the title. If French, it needs an "s" to become "gold radish". I tend to think of it as a corruption of "radii", transliterating it into "golden arms".

In any case, we have the Ferran Fages Ensemble, a quintet consisting of Olga Ábalos (flute, alto saxophone), Lali Barrière (sine waves), Tom Chant (tenor and soprano saxophones), Fages (acoustic guitar) and Pilar Subirà (percussion). It opens with crickets, then the ensemble creating low sounds that have an outdoors feel, including (I think) rubbed, deep drums. There's feedback, usually contained, occasionally yawping, long flute and saxophone lines, all kind of swirling gently together, beginning to congeal. For a while, the strands slowly circle one another--flute, scraped guitar, those rubbed moans, the sine waves acting as a tenuous cohering factor. Ultimately, matters coalesce and we have a kind of drone situation, though complicated and ever-shifting, with ringing tones and harsher buzzer emerging from the mix. The work resides here for its second half, a kind of shimmering, opalescent pool in which lengthy, plaintive, descending tones often appear. Towards the work's conclusion, there are small eddies of disruption, the individual elements regaining some separate character though they've moved, since the piece's inception, to a different territory. It has a very strong character of its own, subtly unique.

"Radi d'Or" is a release that grew on me upon multiple re-listenings as I became more convinced that there was some governing principle(s) at work which I still can't truly discern. Fages has revealed several facets of his musical personality in the past, from outright noise to virtual song-forms and more; this is yet another addition to that profile, and a welcome one. I really hope to hear more in this direction and from this ensemble generally--sounds like a really strong group.

Thanks for the review, Brian. The title is Catalan, and means either 'Golden Radius' or the plural 'Golden Radii'. Sorry, the paucity of information on the AT website is my fault; I never got round to finishing an interview with Ferran about the piece. But I'll ask him to send you a copy of the score. "Subtly unique" is right, I think. I too hope that Ferran goes on to do more composed pieces of this sort. He's a very interesting musician with several facets to his work.