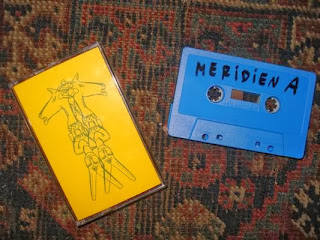 Two sets of field recordings, the first from Senegal and Mali in 1999, the second from Istanbul in 2012.

Aymeric de Tapol (no idea if that's a nom de musique or not) used a dictaphone for the African recordings which I'm guessing contributes to an aspect I find quite compelling, that it to say the uneven and occasionally clipped quality of the sound. In one sense, the venture is a kind of archaic survey--you get the sense of traveling around from place to place, capturing something of what you're experiencing (he concentrates most often on scenes which involve music to some extent), a kind of fractured travelogue. But it works beautifully. Something about the choices made, the sequencing, the roughness and, of course, the inherent beauty of the songs, whether sung intimately or heard from a distorted PA speaker. The music is often embedded within the street sounds, footsteps, conversations and goat bleatings; it's part of the landscape, not isolated.

The Istanbul tapes cover "street musicians, Gypsies wedding and Adnan [muezzin calls]". The recordings are much clearer, rendering the result more in line with traditional "world music" offerings, though at times one can still here the environment in which the sounds are occurring almost on par with the music, particularly the interior booming sound in the room where the wedding is taking place, and there are plenty of rough cuts between segments. Plus, well, the music is pretty great! It's a bit strange, veering from listening to the music as such and being conscious of the taping, disorienting in a good way. It ends in the streets.

Excellent work, highly recommended for any number of reasons. 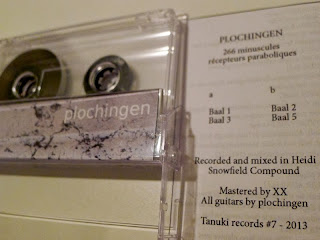 Information is tough to come by, either on the individual going by "Plochingen" (Belgian, co-founder of the collective, martiensgohome, 1996) or the whys and wherefores of this cassette, apart form the hints given by its title and a brief description from label owner, Patrick Thinsy: "Creates his own pure data patches to rework field recordings and home recordings, in this case guitars".

The music is easily digestible, the guitar-sourced tones quite smooth and arrayed in a semi-rhythmic manner here, spacier there. Not sure about what those 266 receptors are up to--occasionally you hear ambient sounds but the vast majority of sounds seem to emanate, quite tonally, from the guitar. There's throb aplenty and it's entirely too spacey for my taste--there's probably a term for that "wow" sound that's more appropriate than thinking of the synth line in "Lucky Man" but it's an unfortunate concordance for me. Pleasant enough, just without the requisite meat and grain.