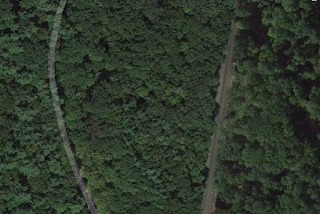 It's very quiet around here.

Our house, which can be glimpsed a bit northwest of center in the above image, sits about 100 feet off a road which averages a vehicle every four or five minutes (more during what passes for rush hour, substantially less mid- and late-day) and, on the other side, about 200 feet away from a single train track, part of the Boston-Albany freight line. Perhaps twelve to fifteen trains a day go either way on that track (at some point on either side of Chatham, I take it, it splits into two), not terribly loud but certainly noticeable. They blow their whistles in town, some one and a half miles away, in what I've learned is a standard long-long-short-long sequence, each time they cross an intersection, three time in total. From this distance, it's far more evocative than aggravating; I somehow think of Partch. --.- is Morse for "Q"; there are various arguments as to how that became the warning whistle for trains.

State Highway 203 runs more or less parallel to our road, about 1,000 feet to the west. It gets regular, though not excessive traffic which I can hear faintly through the intervening firs when I sit outside in the gravel "backyard" on one of the red Adirondack chairs that the house owners left behind. I spend a lot of time there, reading, drawing and painting, solving arcane word puzzles. It might be the first time I've spent extensive time in such a rural environment, not on vacation or with any need to do things, just spending time there. In recent days, between 4 and 5 in the afternoon, I'll often just sit and listen. And it's pretty amazing. It's almost funny, in a way, given the plethora of field recordings of one sort or another that I've listened to over the past 20 years--I can't quite shake the feeling that I'm in the midst of one when out there. The complexity, though, is astounding, far more layered and (necessarily) three-dimensional than what one experiences via stereo speakers. The sense of distances/immersion is very strong, very liquid in an odd way, a feeling of some sounds being contained while others are attenuated, their boundaries difficult to ascertain. Birds, only a few of their calls identifiable by me, sometimes in pitched battles with squirrels (who have their own vast range of aural attacks) or chipmunks, but more, especially beginning around those late afternoon times, the insects. Wave upon wave of (I assume) cricket-ish sounds, innumerable pitches, timbres and durations, far more than I can perceive at a given moment. The density of the trees enables the tracing of breezes from one spot to another as well.

I begin to get more a sense of what has enraptured field-recordists all these years (I knew, of course, but hadn't experienced in such depth) while at the same time strengthened some of the reservations I've had about the value of issuing recordings of these events as opposed to experiencing them. I also realize that were I more perceptive, doubtless a similar range of sonic activity exists everywhere, including our apartment in Paris or my home in Jersey City and, to be sure, something of the sort was picked up in those places and others. But there's a difference here, a more unavoidable presence of sound, perhaps largely due to the relative quiet that allows the sounds to stand out in greater relief. It's pretty great.

I haven't had a stereo since arriving (I received word that our shipment from Paris has arrived in New York and, I hope, will be delivered up here within a week or so, after which time I'll likely write about some of the small pile of releases I've amassed here in the interim) but I haven't missed it so much as there's more than enough in the immediate environment to keep my earholes very, very happy. 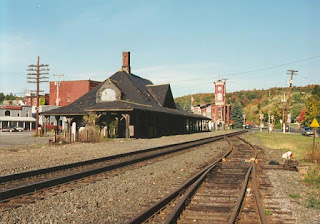 Just a note, from here in lovely Chatham, for those who don't realize the blog is enjoying a hiatus--it is. I'll likely return at some point (after my stereo arrives, for one thing) and write about things as I choose but will no longer be accepting items for review. I post this as, via downloads, I'm continuing to receive such requests. So, one of these days, expect to see some words on various Erstwhiles and Wandelweisers but otherwise....

thanks for checking in.