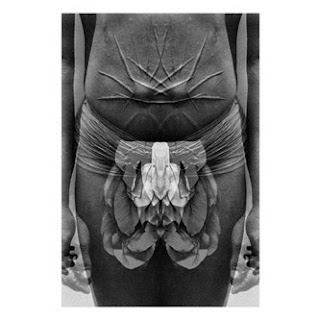 As indicated, 15 brief, often blistering pieces derived from taped sources. It's almost always been the case, for me with Ielasi's music, that I hear a strong underlying musicality, even a melodicism, in his work no matter how superficially abstract it gets. Still the same. Exceptional structure and depth throughout, each mini-track capturing something arresting, each a very different selection of noise, some ambient, some pristine, this one forlorn, that one brutal. All in less than 20 minutes.

Hard to say much more except that it's really good. 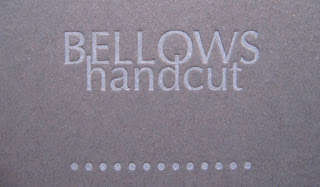 Bellows is Ielasi and Nicola Ratti, wielding contact mics on vinyl, a Revox a77, memory man and sine waves. As enjoyable as "15 Tapes" is, this one is even better, one of my favorites of the year so far. Again, descriptors are hard to come by--there's greater cohesion in the sense of thoroughgoing throbs often being in play, though they're refreshingly irregular and shifting, even as they provide a gelatinous kind of substrate for the shattered, more etched tones and shards. Think of Gum filtered through early (and primo) Carl Stone, circa "Mom's". Maybe a touch of Fennesz and even (don't shudder) Fenn O'Berg, but rougher and with air surrounding the brittler edges. There's iteration, but always eroding, disintegrating.

The first eight tracks, recorded in 2009, were originally released on planam, the latter five, from 2010, new here. I can see some listeners finding the music perhaps a bit too digestible, palatable. But it suits me just fine---excellent recording.

From sources as varied as "positive organ". marxophone, tremoloa, turkish crescent, nfir and synth, Jaeger fashions a skittering, moody, dystopic soundscape that may indeed be algae-encrusted. I think I've heard two other discs by Jaeger (if thsa tbe a real name; I guess there's some doubt), one I liked very much on Mystery Sea and another I wasn't so keen on from unfathomless. This one lies somewhere in between. Drone-y, with some attractively buzzing metals drizzled over deep, lush organ-ics (presumably positive ones), it's reasonably immersive if not as gripping as I might like. The third track uses a type of sound I like a lot--I link it to thwacking the rods of a toy piano from the open end. I take it this isn't from such an instrument, unless that's what a marxophone is, but it's luscious to hear. (ooh--might be! looking it up, I see it's a fretless zither...). This last piece has the most depth; some eerie whines help out. Not bad, fine for the drone crowd. 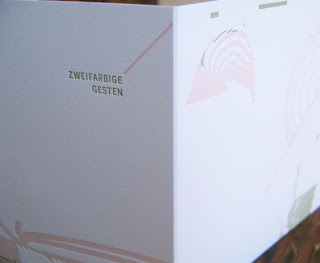 Hard to know what to make of this one. Electronics, I presumes synths of one sort or another, though there's other stuff afoot I take it, producing rougher statics and such. Very simply arrayed in the sense of pretty much one thin layer at a time, spaced apart somewhat but with no apparent structural form. On the one hand, it sounds like someone farting about with electronics, just eliciting whatever happens to come out when this knob is twiddled, that connection made. On the other, over its course, the music's spatial nature, especially when it eases into some Sachiko-esque scratching which it then offsets with deep, fluttery waves, is quite winning. Eventually, it sounds like a faint tea kettle, before ending with paired electronic tom-tom beats. Search me. I kinda liked it, not sure why. 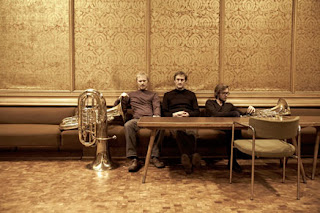 [my pc is temporarily--I hope--out of commission so I can't scan and I also can't find an image of this disc on-line, sorry]

Back in the mid 70s, Howard Johnson organized an all tuba band, six or seven of them, I think, called Gravity; maybe it's still extant, I don't know. I remember Braxton running into Johnson at Environ, enthusiastic about writing for the ensemble; also don't know if that ever happened. I guess there have been all tuba projects in the interim but I doubt they've been as focused and fascinating as this trio.

Two C-tubas and an F-tuba, the latter microtonal, though all three in tandem certainly depart from pitch standards. One track, some 32 minutes long, one linear idea. Linear, that is, stepping back a few paces, the way a dense rope might look linear. Within the strands, however, is an amazing depth of twining tones, long-held, resonating, forming fluctuating pulses that buffet the eardrums in delicious fashion. For the first half, well, there's more variation than in a set of Sachiko sines but it's arguably in the same ballpark, one long stretch of tubaic taffy. They then descend, spelunk into the depths of the horn, the dark booms augmented by soft breath sprays like decompressing oxygen tanks. There's water down there, cold. They emerge slightly, blink at the light and continue on, down an adjacent path, before encountering an obstacle, hesitating, sending out gentle feelers, stopping.

A fine recording, give a listen.

[Martin graciously provided me an image of the cover:] 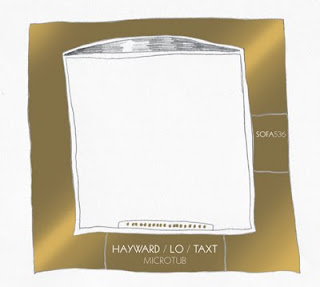 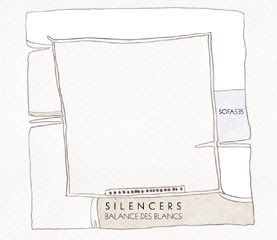 I admit, glancing at the instrumental line-up, I was a bit fearful of a kind of free-jazz/eai balancing act, the sort of thing that leaves some amount of frustration one way or the other. Well, it is, kind of, but achieves, at least on occasion, a rather amazing amount of success. The quartet (Benoit Delbecq, prepared piano; Kim Myhr, guitar, resonant objects; Nils Ostendorf, trumpet; Toma Gouband, percussion) manage, at their best, to create a music that strikes me as similar to what Don Cherry's Eternal Rhythm band might have done if somehow transported intact to 2010. They manage to mix abstraction with implied melodic and rhythmic content in a way that's not disingenuous or cutesy, the prepared piano referencing, inevitably, gamelan but also mbira. If this occurred consistently, we'd have a truly stellar album, but the four also fall into some meandering ("En Turbulence"), not terribly but routine in aspect though that too picks up a head of steam midway through. I would have liked more focus but the group gels pretty well and creates an individual sound that's enticing. Curious to hear where they go from here.

Apologies for the lack of posting...doing other things while on vacation and faced with a pile of stuff upon return, half of which I've yet to be able to give a first listen to....will be back sorta shortly...
Posted by Brian Olewnick at 8/17/2011 07:36:00 AM 3 comments: