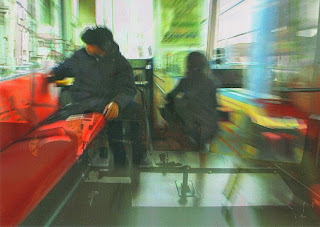 Late December, 2006, on a Hankai Line tram in Osaka, Haco wielding a "stereo bugscope system" (to pick up electromagnetic waves), Tsunoda handling contact mics and a stethoscope mic (to capture physical vibrations), most of the sounds thus caught being, in normal circumstances, inaudible. Calling it a "field recording" would seem to be needlessly limiting. You do, here and there, pick up intimations that you're experiencing a train-like situation, in the repeated (though generally muffled) sound of multiple wheels on sections of track and an engine surge every so often. But the play between those electromagnetic waves (possibly similar to what Christina Kubisch does on her "electrical walks"? and the raw, rumbling vibrations of the title is just fantastic. I take it Tsunoda has done substantial sculpting of these sounds, molding them into a matrix of great depth, sensuality and presence, far more vital than the great majority of tape collage work I've ever heard. Again, as with many a work I find especially compelling, the combination of circumscribed means--here, the tram itself and the methods of sound retrieval--with the wealth of elements discovered and their hyper-imaginative and creative deployment, make for an extraordinary event. Thirty-fours minutes of non-stop captivating sound layers that are almost futile to attempt to describe. Haco wrote, "Perhaps because we used the latest model of tram, the electromagnetic sounds seemed to fly through the air. I hadn't imagined that I'd be able to detect so much. It was like being immersed in a colorful sea of electromagnetic sound. I felt like a full-body recorder and experienced a very intense movement through time and place."

There's a good video documentation on the project but the recording is something else again, a favorite of this (y)ear.

Not sure of Skiti's distribution otherwise, but available from Erst Dist