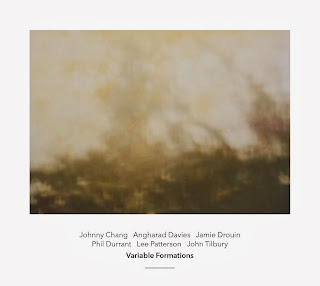 A sextet improvisation realized at Cafe OTO in February of this year, following three prior sets (Tilbury, solo; Chang/Drouin, duo; Davies/Durrant/Patterson trio). A nice notion given that each musician had never before played with at least two of the others. In a way, it still breaks down, in my ears, to three units: Tilbury, Chang/Davies and Drouin/Durrant/Patterson, the strings often combined, in my head, into a duo, the three electronicists similarly in a trio. As in any risky improvisatory endeavor, there's no reason to expect that it will work; much of the interest is simply hearing how this given combination, on this evening, unfolded. Any moments of emergent beauty are almost icing on the cake and there are several scattered through this particular adventure.

Tilbury is, well, Tilbury and he's prominent enough in the mix so that one can, if so choosing, hear it as a mini-concerto of sorts. For the first ten or so minutes, I tend to do that, the pianist patiently doling out two-note figures, the rest scurrying/droning alongside. At that point, there's a break, the music shifting to a kind of simmering, out of which surface sad string cries and single, sharply struck piano notes. Indeed, after a few minutes, it seems that Tilbury is once again the contributor around which the sounds gather. Perhaps it has to do with the fact that he's inevitably, unavoidably himself, with such a developed personality--a single, well-struck note from him bears much weight. I hasten to say that this doesn't, for me, detract form the music at all, it just casts it in a slightly different light than what you might expect. About halfway through its 41 minutes, a fine low, vibrating buzz enters amidst what sounds like (but can't be) swirling, stroked cymbals and soft flutters--lovely. There's a bit a meandering about, less than you might normally encounter, though and eventually, the sextet really pulls it together over the final eight to ten minutes, generating a fine seethe, Tilbury either laying out or quietly working off the keyboard, until re-entering just before the close with some fantastic, slightly muffled and sour notes. That last section is worth the trip and the rest of the drive isn't bad either.

It's the type of the performance that will have some quibbling about the necessity of release but I've always been of the mind, and am once again in this case, that I love hearing documentation of attempts by musicians in whose work I'm interested, regardless of their success. There's enough "success" to warrant it anyway, as far as I'm concerned. Check it out for yourself.