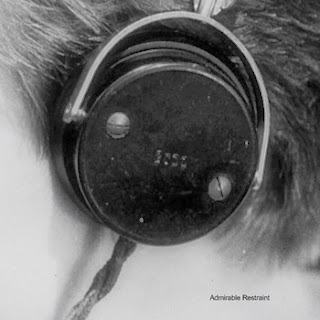 Alastair Wilson has put together a compendium of music available for purchase on bandcamp, the proceeds (pay as much as you wish) going to to the Beyond Blue charity, which works toward reducing the impact of depression in Australia. There are nine fine pieces, all of which are worthy of your pocketbook:

1) Sam Pettigrew/Andrew Brooks - 'The next work you hear is something like a work inspired by the artist Vito Acconci' - a spooky, funny, lengthy assemblage of creepy, mumbled conversations ("I've never had a sister"), extracts from (I think) computer generated transportation announcements in test mode ("The next voice you're hearing something like a voice speaking now on" followed by various street intersections) and bits of canned orchestral music (Handel?).

4) Very tasty crackle 'n' hum from Daniel Jones. Quite chewy. Still have some in my back teeth.

5) an "outtake" from Steven Cornford and Samuel Rodgers that's every bit as boring and wonderful as their Cathnor release.

8) I hadn't heard anything from Phil Julian in a while. His 'York Supplemental' begins with a cascade of bubbly electronics but, happily, soon settles into a grainier gurgle of same which grow progressively harsher until decompressing into a series of impossible to listen to noises. Good stuff!

9) "A F Jones?", I thought "Who the hell is A F Jones? Surely not our own Al?" But indeed it is, everyone's favorite submariner generating a churning, throbbing drone (brilliantly titled, 'X Malfeasant, Appropriating Y'), rich in detail, interpolating a sly, funny rhythmic kick just before descending to the depths, out of sonar range.

Some 124 minutes of all-around excellent music at any price you like, Please do plunk down some coinage!

Thanks Brian. Some info to help your (and other people's) enjoyment of some of the tracks...

1. That canned music was in fact the radio station the piece was first broadcast on, Fine Music 102.5, as picked up in Sam and Andrew's car. During the day, the cutting edge experimental station that I broadcast on plays safe classical music for very old people. The street intersections are all in the inner west suburbs of Sydney. From what I understand, the piece was recorded in one take in a car. Shades of Lambkin?

2. Kostis' piece was recorded in St Pancras, London, as part of an installation.

3. I think Gil's piece is outstanding and yet it's only sketches for another, as yet uncompleted, piece.

9. Namor's piece was performed and recorded in one take, no overdubs, in the acoustically rich Epiphany Episcopal Church in Odenton, MD, USA.