Insub (a sub-label of Insubordinations) has initiated a new (to me) kind of release--one receives a packet, very handsome, about 4 x 6", containing documentation about the release and a download code, thus straddling the line a bit between physical and non-physical object. These are the first two in the label's series. 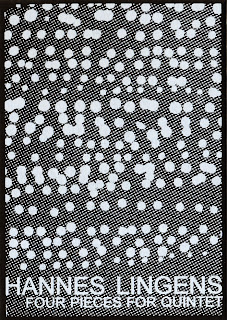 Few things provide more pleasure for me that to, out of the blue, discover the work of a composer that I connect with so quickly. I've doubtless been remiss but Lingens wasn't even a name to me prior to this excellent release. From the interview enclosed, I gather that his scores might often be more overtly complex than this one but "Four Pieces for Quintet" is subtle enough as is, the concision of the score allowing for plenty of variation within a given field.

The quintet is Koen Nutters (double bass), Johnny Chang (viola), Michael Thieke (clarinet), Lingens (Accordion) and Derek Shirley (double bass). The score consists of five bars, each divided into rectangles or squares of colors or empty spaces (each square encompassing 15 seconds, by my reckoning). Five musicians, five colors, each piece lasting five minutes. Players select a tone they feel corresponds with the color and hold that note (all strings arco). Very simple but, given the combination of placement of the frame and the sensitivity of the players involved, the result is rich and profound. The presence of two basses tilts the music toward the low end though that's offset often enough by the viola and accordion especially. Not a new idea, of course, that a graphic score will gently steer improvisers down a path they might not tread otherwise, but still one that's capable of yielding fresh fruit. The pieces, as realized here, sometimes take on a hymn-like feel, very slow, with "voice" lines entering at irregularly staggered intervals, the accordion taking on a breathing, in and out aspect on occasion, others assuming the organ role.

While I'm curious how this score might be handled by different ensembles, this one is just richly layered and stirring. I also clearly need to hear more Lingens. Great work. 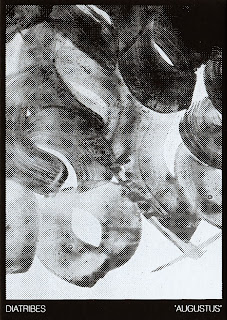 A return to action by Mssrs. Cyril Bondi (floortoms, objects) and d'incise (laptop, objects). The enclosure is a quasi-symmetrical collage that includes the visages of Feldman, La Monte Young and, I think, a young Steve Reich though I don't hear much direct influence. The again, a chair dragged across a floor--possibly! Though the single piece feels improvised, there are apparently agreed upon way stations in place, boundaries to remain within, which likely account for the cohesive structure. The duo has a very granular, particulate sound--I always have the impression of people scurrying through a floorspace densely strewn with detritus--though this is leavened here by accordion-like tones, presumably laptop-generated. Indeed, much of the piece offsets those long tones against the grinding, growling clatter created by Bondi and it's a good contrast, though Bondi gradually ends up bowing (?) an object to more or less match d'incise. The notes describe it as "ritual but yet rational" and that's not bad. You do get the sense of some ulterior, non-musical motivation going on, an air of darkness and mystery that goes a long way toward making the outing a successful one.

A solid set, one of those that I imagine would have been great fun to experience live but it's plenty good here.

Thanks Brian, interesting to read how you perceive it "blindfolded". To reveal a bit of the mystery, we both do play melodicas. In fact there's may stuff we both play, like the "not-exactly-bowed" last sound...
Well, hope we'll meet at a concert someday...