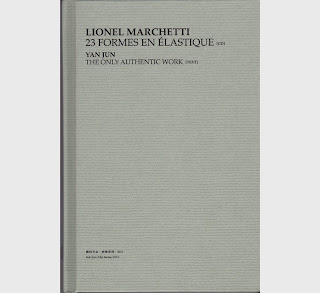 The basics: a book and a CD. The book is a very handsome object, hardcover, a soft grayish-green, very sensual texture, with an obi. It contains a series of short texts by Yan Jun, with illustrations, The first half of the book is in Chinese, the second half, the English translations, the same illustrations repeated in each half. The CD contains 23 tracks by Marchetti, 77-minutes worth, composed between 1987 and 2011. I think some, perhaps all, have been previously published, though I'm not sure about this; I have a number of Marchetti works and while I don't immediately recognize anything, it wouldn't surprise me to find out I have some tracks here and there. Maybe not.

Yan Jun's writings range from personal stories to philosophical musings, often involving self-reference and occasionally wryly amusing. He opens with a wonderful account of the origin of Lao Yang's untitled release, consisting of a steel saw blade in a CD case, and the willfully naive insertion of same into a computer drive by the poet Hsia Yu. Much of the writing deals with Marchetti and related musical/theoretical ideas including musique concrète, collage, Godard, Blanchot, classic Chinese art and much more, ending with a blissful evening spent in a seedy bar in Suzhou, with scant patrons and extraordinarily noisy drilling coming from next door. It's open, honest, sometimes thought-provoking and a pleasure to read.

I think it's been a while since I've really heard anything substantial from Marchetti but, given the caveat above, this might be my favorite sampling of his work. Very wide-ranging in sources, there's a tendency toward the quiet (if often rough) and relaxedly contemplative, though it begins with a rather harsh, primitively mechanical, repeating sound ("Météores"). Shards of tape collage mix with voices, found music, a woman's voice listing years, slowed speech, scratches, blurred rockish extracts ("Mysteria"), accordion dirges and countless other aural snapshots that manage to work themselves into a stream that flows by almost comprehensibly. It's difficult to describe in other than cinematic terms, a free-associative documentary consisting of concrete, if skewed, images arranged in a sensitively poetic manner that conveys elusive meaning. I should just say I like it a lot spent much time immersed in the sound, imagining the contexts, immediate and wider, connecting it back to Yan Jun's texts.

A fine release all-around--search it out.