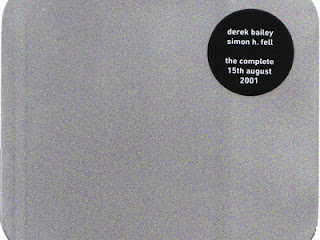 Previously released in part on a Confront 3", the entire session that took place on my 47th birthday is now available.

This is a problematic release for me to write about as there are two distinct ways I can go at it. One is as a listener at the tail-end of 2013, someone for whom the kind of music practiced here no longer inspires very much interest at all. The other is as myself in 2001, when interest in said music was decidedly on the wane but still held a decent amount of fascination. As much as I love Bailey, my tastes in his work have always run toward the sparer end of things, the solo recordings, the one with Min Tanaka, etc.; here, he's pretty much aflutter, dense and hyperactive. Although that may not be fair--it could be Fell occupying every vacant interstice. My history with Fell's work is also spotty, from early on (late 80s?) owning some of the LPs on Bruce's Fingers and, a bit later, Composition 30. In almost all instances, I greatly enjoyed parts of it, found other sections tedious going, though I greatly enjoyed his work with IST and VHF. The one time I caught him live, at Tonic (I forget the configuration) was similar, a combination of super-impressive (possibly the only time I've ever witnessed a bassist use his ear as a string depressor or bow his own fingers) and perhaps needlessly pyrotechnic.

All of which to say that it's hard for me to get into anywhere near the frame of mind required to give this a dispassionate hearing. Four tracks, totaling 70 minutes, two done before taking a tea break, two afterwards, Bailey on acoustic guitar throughout. I should say at the outset that there are glimmers of brilliance scattered everywhere, the first in a brief "solo" portion by Bailey about eight minutes into the initial track--stunning. Even when Fell enters with a torrent of hollow, fierce plucks, the combination works perfectly for a while. I often had the impression, seeing Bailey, that he was quite willing to play in his own world, giving little regard to those sharing the bandstand. Not rudely, of course, simply treating the contributions of others as just another sound in the room unless they played something extraordinary enough to catch his attention (as when he played with Cecil Taylor at Tonic). I get something of that sense here, the guitarist drifting out of and occasionally into the "conversation". Maybe Fell approaches things similarly; I'm not familiar enough with his work to know. I don't think it's a bad approach at all, think it can lead to some great tensions and, in a way, "natural" music.

The second cut opens beautifully as well, Bailey wrenching single notes from his guitar as only he could, Fell in the depths of the bass. It's only maintained for a minute or so before descending into the more routine, if still reasonably exciting interplay that makes up the general tone of the session. I guess it's pointless to sit here hoping for more areas of silence, of appreciation for things in the room outside of themselves. Nonetheless, that feeling persists. I have to just plunge into it, accept the parameters, stick my head between the speakers (Bailey on the left, Fell on the right) and deal. As much as it's possible to get lost in the maelstrom, it's still the quieter portions (like the end of the third track or the beginning of the fourth, when Fell switches to bow) that speak to me most deeply.

But for most fans of either musician, this release is clearly a must-have. Well recorded, vigorous playing, strong attacks; it'll satisfy the appetites of the great majority. It's only us old cranks who'll be left hankering, vainly, for some of that old Bailey introspection.

In lieu of the (hopefully) upcoming Confront website, the disc should be available from Metamkine in Europe and Squidco in the States.