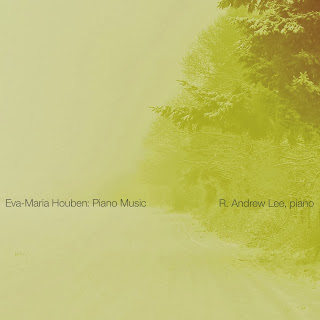 On first blush, "difficult" isn't a word you'd immediately apply to Houben's piano music. The notes and chords are not unusual, indeed they're resolutely tonal; no extended technique is employed. But where there's the merest surface similarity, in that respect, to Feldman, she offers fewer handholds in the form of connective tissue, instead dealing more forthrightly with silence. This places a considerable demand on the listener, forcing him to listen differently, to pry his ears away from the associations with Romantic or post-Romantic Western music those notes tend to otherwise connote. William Robin's excellent liner notes herein allow one to better understand the structure and ideas behind both pieces. "abgemalt" ("painted out") and "go and stop". Still, as with Feldman's longer works, grasping the overarching form is no easy task, particularly with "abgemalt" (almost 40 minuets long) and its extended silences.

I imagine a decision was made by R. Andrew Lee (who, as ever, performs these works with great sensitivity and depth) whether or not to record in a pristine studio environment or in one where external sounds were allowed in. He chose the former so it's up to the listener at home to integrate this music into the aural activity occurring in and around his/her abode. I find this a bit tough, I think because, again, what the notes imply, to me (the basic, if abstracted, Western Romantic nature) tugs against the idea of rendering them equal to the ambient sound world, insists of focussing my attention. But, of course, this is great, posing a fine challenge which, in the moments where I think i achieve the balance, is quite beautiful, more delicious for not having been handed to one on a platter. Different listeners will doubtless find this more or less difficult, or not at all so! The chords, slow but fairly bright, are offset by single low notes and, of course, silence. The deep tones have occasion to repeat every so often, and now and then some very high one are struck--the pattern holds for lengths of time, then shifts unexpectedly. It's a bit disquieting as you've been lulled into one state, maybe were just getting comfortable. About 15 minutes in, there's a lovely sequence that opens an entirely new door. The difficulty isn't so much in the music as such, it's accommodating the outside world into its shifting form. A challenging problem and a fascinating piece of music--after six or seven listens, I'm still enjoying tackling it anew each time.

"go and stop" seems more conducive to grasping, its pairs of slightly descending chords, the tones generally sustained for a hood while then abruptly terminated, the chords themselves, as the title implies, often ending at unexpected points. As before, the sheer, traditional beauty of the chords acts to build certain expectations of progress and resolution that are always thwarted. There's a sense of coming back and "trying again", only to find that the goal, such as it is, remains elusive. The clear answer being to rethink one's goals. (Parenthetically, just wanted to mention that the chord sequence reminds me of Gil Evans' marvelous "Zee Zee", clearly coincidental). Here, the sheer attractiveness of the music obviates the need to do anything but bathe in it, mindful of those sharp, terminating edges perhaps. Very beautiful. 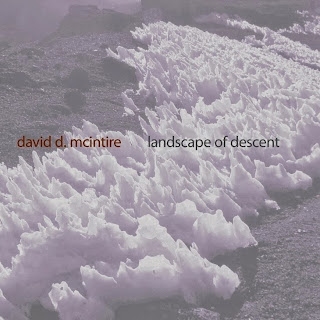 Christmas bells, eh? I likely wouldn't have guessed that sound source in particular but it seems reasonably clear that the sonic range encountered here might all derive from a single root, however digitally stretched, skewed and otherwise transmogrified it was. I'm less concerned with the specifics than the effect of the resultant music as a whole. For the first third or so, I found the layers of bells a bit flat with a same-y sense about them, regardless of how they'd been altered. Perhaps this owed a little to simply being aware of the source, something maybe I'd rather not have been. But then a shift takes place and the whole sound field takes on a different character, much deeper and mysterious; there are several points where I'm almost convinced I'm hearing tiny choirs (I admit to conjuring up the Mothra girls there momentarily...). It draws you in much more, hints at layers unheard. This is more or less the condition in the last 40+ minutes of the work, as it slowly ebbs and wanes, rather amorphous in structure (though I feel I might be missing something there), a large, finely layered mass that very, very slowly fades away, or descends into the nether world.

I don't think I've heard McIntire's work before and am curious where this fits into his canon. As is, I wanted to feel more of a structure that complimented the sound manipulation though the sensual output itself was very enjoyable on its own.

bohemia Phone ringtone is a music that plays when a call comes in. It is a high quality audio file and is usually in m4a or m4r . format