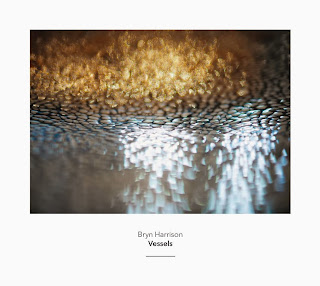 A 76-minute work for piano, performed by Philip Thomas, drawing inspiration from Howard Skempton's string quartet, "Tendrils". Given this, the reference I daresay most will make is to the late Feldman piano works, doubtless an unfair one. Harrison notes this fact in the interview on the label page, citing the differences in conception, but it's still a tough thing to purge from one's mind.

There's a consistent pace and feel to the work, a kind of meandering (not meant pejoratively) within a circumscribed area. Unlike Feldman, the tempo doesn't seem to vary much nor, at least as played here, is there the kind of subtle dynamics of touch employed, say, in Tilbury's realizations. So while one can appreciate the tendril analogy, the gentle unfurling, there is something of a sameness in effect, kind of a tonal white noise, if you will wherein the actual notes, sequences, chords, etc. change but one perceives a steady state. At least this one does. Harrison says, "I like the way this creates a sense of movement but without a goal. I’ve compared this before to being somewhat like a waterfall, where there is motion but without an end point". That strikes me as another valid analogy; I might extend it back to Feldman by comparing his work to a wandering stream, a similar sameness/difference in composition (water, the space within which it flows) but the listener/follower ends up, quite magically perhaps, in another place. Perhaps it comes down to deriving equal pleasure from remaining fixed while something, the Harrison-generated notes, wash over you and depart--not an unpleasurable sensation, to be sure--versus ambling along beside, even being ferried and encountering extra-musical (extra-acqueous!) sensations along the way.

I'm stretching this too far, no doubt. Among other things, it raises interesting questions about stasis and ability/desire to grasp large scale works containing minimal (of a sort) activity, though maybe that simply revolves around the kind of activity, however scant, one finds absorbing. I can recall sinking into Sachiko M's "Bar", which consists of three sine tones over the course of an hour, lasting approximately 40, 15 and 5 minutes each--no problem, loved it. Perhaps that was enough progression to sustain me. With "Vessels", it's also not a problem to listen--the music is certainly attractive enough--it's just grasping for a structure that at first seems elusive but eventually comes to be thought of as not there at all, in the way that waterfall has midair, varying structure in one sense but not in a way that rewards continuing observation; the infinite number of quasi-similar states cancel each other out. The music is clearly constructed with a purpose that would be done a disservice by listening to it as part of the environment. I feel I should be concentrating on it wholeheartedly but have great difficulty doing so. Any random slice is very enjoyable, however, the semi-repeated kernels of melody sliding over and under each other, and I can well imagine listeners cottoning to "Vessels" in its entirety much more fervently than I've been able to.

Love this release. And I wouldn't worry about the "not-Feldman" thrust of your review. Anyone who has heard it would understand why a journalist would might have to mention Morty to illuminate how this piece immerses the listener. It's disorienting like Feldman but also very different due the friction between its ostensible stasis and constant "meandering" (as you say—and it's true!)

I first heard the 22-minute version in concert (when Thomas toured in Canada) and had regrettably arrived at the concert late (1/4 of the way through the previous piece). Harrison's piece, in that irritating/ anxious context I had created for myself by arriving tardily, was tough to settle into, but now, hearing it on recording with a quiet mind, it's very beautiful and fundamentally odd experience.