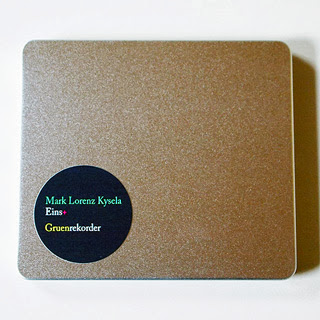 Six compositions by different composers performed by Kysela on clarinets and saxophones with electronic and tape accompaniment.

2) Thomas Stiegler - Treibgut IV. A thoughtful piece, constructed in segments of 30 seconds or a minute, those portions consisting of a soprano saxophone playing a simple melodic line or held note (sometimes multi-tracked), steady sine tones and recordings of "secular sounds" (valves, meter, yards), all shuffled and irregularly overlaid. Though livelier, it has the control of a Tom Johnson piece. Also I get the sense of turning over a series of cards, one two or three at a time, revealing images that are similar to an extent but varied, each set self-realted. I like this one a lot.

3) Martin Schüttler - schöner leben 7. For saxophone and electronics, the latter consisting of, in good part, "soundtracks from You Tube videos in which saxophone beginners present their modest progress". Schüttler is interested in non-professionalism, detritus, assemblage worked up from discarded, banal material. The results are disjunctive enough, reminding me of something Zorn might have come up with circa "Locus Solus" had he the available technology. I don't mean that as a slight--the piece works well, a kind of combine, if not a paradoxically transcendent one.

4) Michael Maierhof - splitting 13. Using a plastic cup filled with marbles inserted into the alto saxophone's bell, melding it with other such cups being electronically stimulated on their own. The music is, not surprisingly, buzzy but also very strained and, well, unpleasant. Which I'm sure fulfills Maierhof's intentions. I'm reminded a bit of Thomas Ankersmit's excruciating (and wonderful) experiments of some years back. Similarly here, the listener has to accept a large degree of discomfort, to give up searching for comfort zones of any sort. I found it worthwhile, but its a very tough go.

5) Alvin Lucier - In Memoriam Jon Higgins for clarinet and pure wave oscillator. Well, I'm a complete sucker for this stuff. A relatively early (1985) work, Lucier does his trademarked thing, her having a clarinet playing steady tones against slowly moving sine waves, developing beats that neither instrument is producing on its own but which are being created inside the ear of the listener. Kysela plays cleanly here and the piece takes off as Lucier's tend to do.

6) Uwe Rasch - aus vierundzwanzig: drei. A short piece (about 2 1/2 minutes), loosely inspired by Schubert's "Die Winterreise", not that you'd recognize any association on hearing--delicate, flitting soprano sax against clunking, intentionally awkward percussion. Rather humorous even without the reference though all snickering is brought to an end by a frowning gong smash.

An enjoyable recording, extremely well played, covering a wide range of contemporary composers. What more could you want?