A passel of LP releases from God Records over the next few days... 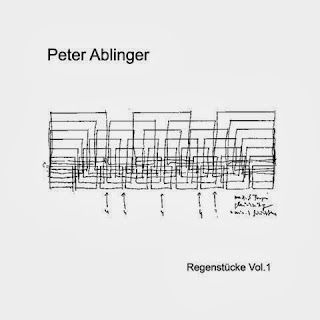 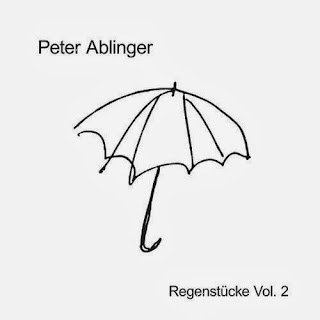 I'm inexcusably late in getting to Ablinger's music, having only heard the merest smidgen before; much catching up to do.

Volume 1 contains two works. Side one holds "Ohne Titel/3 Klaviere (1-6)", a 1993 performance by pianists Hannes Gill, Isabel Pérez-Requeijo and Elisabeth Väth-Schadler. Part of the composer's description of the piece reads, "The piece involves microrhythms and the localization of similar sounds in space. A piece in 6 parts, each like beginning rain." Rain ("regen") is the operative idea for all the works on these two discs. Here, the three pianists (no instrumentation is specified in the score) play mostly high-end, light, stuttering rhythms that indeed strongly bring to mind the semi-random rhythm of raindrops, falling from the sky or dripping from objects. The six portions are similar/different; Ablinger draws inspiration from visual art like Monet's multiple views of the same subject. I'm curious if he actually transcribed raindrop patterns for the score--wouldn't doubt it at all. Even the rapid arpeggios that ripple through the drops now and then might be heard asan overflow tipping past a gutter's restraint. It's delightful, almost as much as listening to the source.

"Regenstück 1-6/6 (3) Schlagzeuger" is here performed by Brian Archinal on percussion (in San Diego, 2012) and resides very much in the same ballpark. If anything, the sounds, which seem to involve struck glass, bear a more raindrop-like tone than the pianos. In the second and fifth iteration, brushes (I think it's brushes--sometimes it sounds like breath through tubes) are introduced. The drip-rate seems to slacken ever so slightly toward the end. Equally as enjoyable, perhaps more, than the first composition. Some of that enjoyment, no doubt, comes simply of the unforced verisimilitude of the patterns to that of random drops; how this was notated, I can't begin to fathom. One could, of course, listen to the real thing but there's nonetheless something magical about this.

Rain on its own makes several appearances in Volume 2. "Stadtoper Graz, Regenstück" finds the Ensemble Zeitfluss Graz, led by Nassir Heidarian and Edo Mičić, apparently out in the rain,, though I think the latter is an overlaid field recording. As above, her the light string pizzicato and piano emulate raindrops, even as they're all but smothered by the mass effect of several million of them. Just near the end, the rest of the orchestra, brass and woodwinds, makes a furious, urgent entrance only to be snipped off abruptly as though the tape was cut. The skies have opened once again for "Das Buch der Gesänge" ("The Book of Songs"), in the backyard (hinterhof), in the car, tapping the roof and windows. Just rain and ambient sounds. Absorbing. Yet another ensemble, the Bruckner Orchestra, Linz, under the direction of Pérez-Requeijo, is unable to find shelter from the inclemency, the various instrumental factions jostling each other for cover. I think the same kind of patterns are used for this piece, though the effect of flutes and french horns imitating rainfall is strange....A torrent arrives, scattered applause, a bit of chatter.

Finally, "Membrane, Regen", an installation in which eight glass tubes are, if I'm not mistaken, activated by water drops. They're extremely reverberant and differently tuned. This, combined with regular rhythms of varying pace, makes for a kind of aqueous chime system or some ghostly melange of several drunken Balinese ensembles. Percussionist Adam Weisman is credited here; I was confused as to how he contributed until viewing this video. A lovely piece and a good, simple structure that still allows for irregularities.