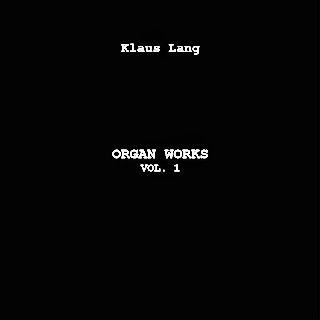 Two very different works for organ from Klaus Lang, a decent portion of whose oeuvre (everything that I've heard, which is a limited sampling) deals with that instrument.

Side One contains "17 symmetrien", a 2012 composition that entails the hands and feet of five musicians, here Lang, Aleksej Vylegzhanin, Ja Young Baek, Adam McCartney and Kelvin Ng, who manipulate the manuals, pedals and stops of the organ in the Mariahilferkirche (Church of Mariahilf) in Vienna. It begins with a fairly complex and dense weave, shimmering tones of varying timbres and only gets more complex and dense from there over its 25 minute span. It seems cliché to use a term like "prismatic colors" but it's hard to avoid that sensation. There's a long duration throb of sorts in effect; the dynamics subside for a short time then return with renewed force and several new sound palettes. Lang stats, "I put my music into the space. I don’t want to send any messages, I think of nothing and I don’t want to purport any meanings. The listeners hear what they hear and behave to the music as they feel." and "17 symmetrien" lives up to that idea, filling the space (one can only imagine how it sounded in the church) and just residing there, respirating. It's large enough that you, as the listener/viewer, seem obliged to get up and circle it, pierce it, to experience even a minute percentage of its corpus. I think there's much going on that's not immediately apparent, elements that add to the overall effect even as they're masked by the hugeness of the sound. The closing minutes have a bell-like sheen, very beautiful and mysterious, and a fine cap to an impressive piece.

aside from "Ed Wood", I'm not the biggest Tim Burton fan around, so the title, "mars attacks" (for which Emanuel Schmelzer, in 2004, manned the organ of the Stiftskirche in St. Lambrecht, Austria) gave me pause...The piece is constructed of short, dull stabs at the keyboard, barely glued together by, at first, high, almost sine-like pitches. As the composition progresses, lower, richer held tones enter, forming a substrate in which those isolated pulses are planted. The drones begin to break apart, some decaying into shards, others acquiring a growling aspect, the piece as a whole fragmenting into disparate elements drifting out from the briefly held center. If there's a allusion to invading aliens, I can't hear it (thankfully) but the work is not only a fine tonic to "17 symmetrien" but absolutely held my attention throughout, not so much for any inherent beauty in the sounds but for attempting to track the constituent parts as they wandered through space. 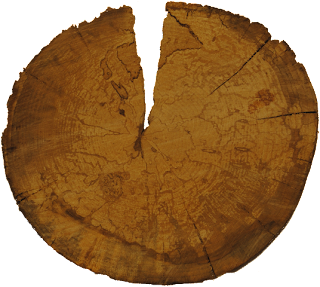 "The woodscratcher is a composition and sound generating machine, which cuts a 2-5 cm thick disk of a wooden trunk in a circular line along the growth rings of the wood."

A side each is devoted to oak and larch undergoing this process, each slice lovingly (and beautifully) depicted on the vinyl itself--that's oak above. And...its sounds pretty great. The motion of the saw is circular and the sounds thus obtained have that feel as the loop again and again, always slightly different and gradually changing as the bits gnaws further into the wood. Four pick-up mics are used at different physical points in the process, the resultant noises forming a thick layer of varying textures and depths. The oak side is more guttural--you even getter a sense that the wood is a bit damper, throwing out shavings that glom the process later on. The larch feels crisper, airier. The tracks, each about twenty minutes long, simply go on until they stop, the machine operating without intervention. It's rigorously minimalist; Riley or Reich, with more imagination, should have done something like this. And the material presence is excellent, no nonsense, rendering the kind of situation you might have been lucky enough to find yourself in at one time, with the luxury of just being able to sit there and bathe in the sound. I'd also recommend some DIY mixing by playing this recording simultaneously with the YouTube video and creating your own multi-rhythms.

A unique and rather wonderful recording, even if it only needs to be done once. 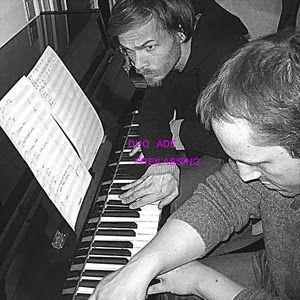 "Freilassing" is a one-sided LP played on one piano by two pianists, Gottfried Krienzer and Christoph Uhlmann who together comprise Duo Adé.

Following 43-second track called "Adjustment" where the pair appear to check the instrument's tuning, they launch into the title piece. The music is a kind of maximal minimalism, somewhere along the stretch of road where Louis Andriessen and John Adams used to live. Rhythmic in a way that approximates the mechanical (intentionally) with flourishes and filigrees abounding. Halfway through, the pace slows, still rhythmic but looser and ambling. There's clearly a good allowance for improvisation and this section has a nice sense of falling apart, even careening out of control while still being stuck in a kind of rut in the road--I envisage an ancient wagon, perhaps that of an old snake oil salesman, covered with banners and swinging lamps, pots and pans, trundling along that gouged dirt road in front of the Andriessen residence. Is that the crumbling Ron Geesin cottage I see up the way? 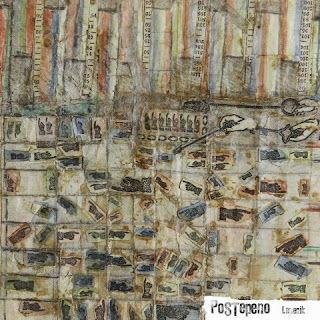 Lepenik, on the set of "poSTepeno" pieces that occupy the first of the two LPs here, concentrates on an area adjacent to that explored by the likes of Alvin Lucier--the juxtaposition of acoustic instruments (here, piano) with sine waves. But whereas Lucier will typically write long, drone-like passages wherein the instrumentalist attempts to approximate the exact pitch of the sine waves (an impossible task, resulting in those wonderful perturbations), Lepenik writes slow, often processional-sounding lines for the piano with a fluctuating sine wave alongside, so that the interaction varies quite a bit, the sounds sometimes treading independent pathways, sometimes interweaving.

"Grete vor dem Haus" takes up the second disc and is basically an expanded variation on a similar theme, though the writing for piano is a bit more robust in parts, making clearer allusions to contemporary Western music styles of the late 20th century. Again, the meshing of held notes and sine waves is quite delicious and, as before, there's quite an assortment encountered along the way. There's a strangely mesmerizing quality to all of this music, an odd sense of drawing the acoustic phenomena "out of the air", which of course, is what's happening. Fascinating work with a substantially different effect on ones ears and brain than, say, Lucier.