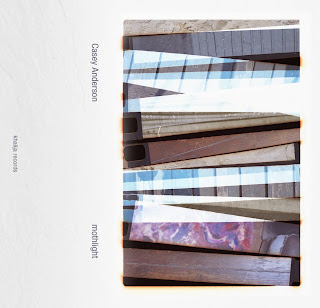 Two uncompromising, rather difficult cassette sides from Anderson (heard by myself on CDr). The severity of some of the usic raises interesting questions about perceived intentionality on the part of the listener, trying to determine (if it's worthwhile considering) how much, if any, is random, how much purposive. It begins with the kind of sound that, in my head, registers as "cracked electronics", the staticky sizzle that one heard on occasion with Voice Crack and more recently, just to site one example, Bonnie Jones. The sound masses move--I get the impression of two strands winding about each other, coming into uncomfortable contact, being repelled within a confined space, bouncing back. Given the title of the release, one almost automatically things of a mic'd moth buffeting against a hot bulb. Sometimes it sounds manipulated, sometimes "natural". It shouldn't matter, though it's curious how one (at least, me) tends to qualify the results depending which angle is used, somehow finding it more satisfying the less I think the actuator is actuating. Perhaps the nearest point of comparison is the Rowe/Sachiko M opus, "contact", though Anderson, however the sounds are being generated, is busier, less concerned with placement, more with linear, if hesitant, flow.

The second side opens in adjacent territory, with a fuller range, mid- and low tones surrounding the crackle, the odd oscillator loop springing out. There's a sense of a conduit having been opened, allowing several kinds of energy strands to course through. The acoustic space finally opens out in the last portion of this side, the sizzle, accompanied by lower, more mysterious bumpings and gurglings, now taking place in an aerobic environment, a welcome situation after the tight intensity of the prior music. It's a fantastic seven or eight minutes, something one could wallow in for quite a while, admittedly feeling like a kind of "reward" for having weathered the preceding 20 or so minutes.

A good, tough effort. Very curious to hear where Anderson goes from here. 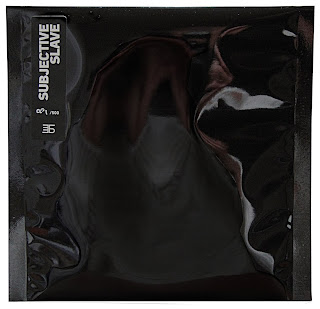 Ten tracks of computer-generated material designed to convey human being's "inclination to create [in] themselves the conditions of their own alienation" would seem to promise some dark, bleak soundscapes and, more or less, that's what Dambrain delivers here. After an initial all-out assault that will scour any latent cobwebs from your auditory tubules, the tracks vary in intensity, several quite quiet, but all carrying the shiver of the, well, alien. A chilly air circulates through the pieces, whether they softly twitter or hurtle past, heedless of reception. Arthur C. Clarke's "Rendezvous with Rama" comes to mind. The overall cast is so steely-gray and so few footholds are offered that I find it difficult to really get into, appreciating the craft but, perhaps, not finding the value in the alienation. If I really disassociate myself from it, not the easiest thing, i find that it "works" in the sense of creating its own pod of existence, even if it's opaque to me. More hardcore computer music fans, especially those with leanings toward noise, might find it right up their alley, though.