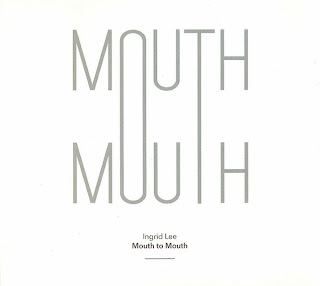 Lee is part of that splendid torrent of ex-Cal Arts students who worked with Michael Pisaro, James Tenney, etc. and whose own music has evolved from there. One of Lee's abiding interests is in "ideas of contagious movement and its social implications: the spread, replication, and mutation of ideas, memes (‘going viral’), between groups and individuals". Her music, as represented here (her first release) exposes these processes very clearly, somewhat akin (in a limited sense) to Richard Glover's approach as indicated on his contemporaneous recoding on the same label, though Lee's result is very different. As with the lineage which served as a source of inspiration for Glover (Tom Johnson, Lucier, Tenney), there's the risk of "only" (with all the complexity that term implies) reproducing sonic phenomena, making the leap of faith that beauty, in some form, will emerge. To my ears, Lee's work succeeds about half the time, though it's fascinating to try to discern why, for me it does or doesn't.

The first piece presented here, "Of Monsters", for accordion (Merima Ključo) and piano (Lee) is also the most overtly approachable and, perhaps, successful. Sumptuous accordion swells ooze between single piano notes (sometimes using preparations), the overtones mixing with clarity and serenity. Traditional (and lovely) tonality is nicely dampened by those thudding notes where a string has been waylaid as well as by the chordal variations played by Ključo, that wander away from the initial lushness. There are all manner of fine balances here, between the superficially attractive and deeper beauty, between pure tones and rudely compromised ones and more. This generates a welcome mystery, all the better when the elements are laid out so plainly, causing the listener to wonder at the complexity that emerges. For myself, "Of Monsters" would make the disc more than worthwhile.

"Cells" is for two amplified snare drums (Lee and Rowan Smith) and, again, the process is right up front. A sympathetic vibration is initially caused by a reaction to a pre-recoded, amplified snare and this resultant vibration, already on the first go-round increasingly buzzy, is reintroduced several times, each iteration producing a fuller, noisier outcome, generally speaking related to the classic "I Am Sitting in a Room" procedure though again, with wildly differing results. I'm not sure what Lee and Smith are actually doing during this, I must say, but no matter. One hears, then, several sections of an accumulating feedback/buzz, often quite harsh. It might well be due to the recording, but I found the sound field to be somewhat flat and lacking in the kind of varied detail I'd expect to hear; the sensation may well have been different in the room. For me, this piece fell on the other side of that divide mentioned above--it's interesting, in a limited way, to see/hear what happens but after it does, I'm left with not so much unlike the Lucier piece, say (granted, an unfair comparison) where entire sound worlds miraculously emerge.

"Beads, Spit" is for electric guitar (Max Kutner), percussion (Tony Gennaro, I think on bowed crotales and, perhaps celesta or glockenspiel) and piano (Lee), the first two creating tones that "are derived from overtones extracted from the piano chords, creating sounds that emerge, sustain, and end at different points". We hear the slow back and forth between the instrumental elements, solo and duo, each sequence lasting about eight to ten seconds. The piano becomes a bit more forceful as the composition continues, its companions also shifting their attack slightly, gradually adding subtly different colors. The frequency of the chords increases, setting up clearer rhythmic cells, eventually achieving a level of urgency that borders on the strident. As in "Of Monsters", the processes form the basis of extra-procedural aesthesia, a good thing. Here, the strongly plucked guitar reminded me a bit of Michael Gordon's music form back when ("Thou Shalt!/Thou Shalt Not!", for instance) but much better. I prefer "Of Monsters" but this is also a strong piece.

"Another", the longest work here, almost 18 minutes, is for sextet: violins (Erik KM Clark and Andy Studer), viola (Heather Lockie), cello (Melody Yenn), bass (Jake Rosenzweig) and vibraphone (Tony Gennero). It deals with shifting tunings, ideas of dominance and the simulation of naturally occurring acoustic phenomena by intentional playing. I've been listening to this a lot, trying to find a way in. Not that it's difficult or unattractive on the surface--that's not the issue--it's more determining for myself the whys and wherefores of the piece, especially over its duration. The strings perform microtone-encountering glissandi, up and down though with an overall downward trend, I think, often over a relatively steady vibraphone pulse. These occur in two to three minutes segments and the layering between the strings and vibes seems to vary, overlapping at different points, sometimes not at all. I've no doubt there are subtleties of tuning that are escaping me, but by the work's end, I'm feeling that little was encountered that hadn't been in the first few minutes. It did open somewhat for me upon repeated listenings, but still left me unsatisfied--perhaps that's the point or that my ears simply require more exposure.

Overall, then, I come out half and half on "Mouth to Mouth" but leave open the possibility that the music will more clearly reveal itself to me over time. And I am very interested to hear further work from Lee.