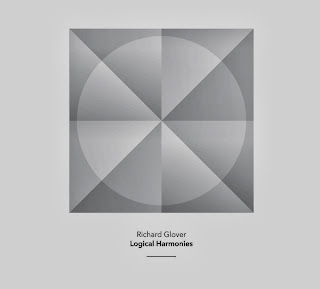 In the interview on the Another Timbre site, references are made, with regard to Glover's music, to that of Tom Johnson, James Tenney and Alvin Lucier. These seem quite reasonable though, at least on the basis of this recording, my first experience with Glover (unless I'm forgetting something, always a strong possibility), his work stands apart in very beautiful ways. While process oriented, the pieces here are entirely acoustic which might tend to align him more with Johnson but there's also a clear concern with sonic beauty, in an almost classical sense, that's at odds with Johnson's list-making that adopts a more remote stance. I also detect subtle allusions to classic forms, again just a step or two to the side of the almost clinical presentation that can occur (not without its own attractions, certainly) in a piece by Johnson or Lucier.

That said, these are seven extraordinarily wonderful compositions.

The disc is constructed alternating four solo works with three for ensembles, bookended by "Logical Harmonies 2" and "Logical Harmonies 1", performed by Philip Thomas on piano. Without any external knowledge, and given the steady, stately tempo of the work, I heard it as a kind of processional, connecting it to compositions by Satie in his Rosicrucian period (the Ogives, for example) or even certain Skempton pieces. But for all its regularity in pacing, the shifting chords inject absolutely absorbing harmonies that almost flitted by, one after another, always changing subtly, sometimes sweet, sometimes sour. It wasn't until I located the score that I realized the structure of the work did indeed follow a rather strict and simple pattern, but one that (crucially, I think) allows the pianist leeway in choosing whether or how to invert the triads as prescribed, which Thomas does brilliantly. The effect, for me, again recalling the processional feeling, is of walking through a large church-like interior, the light through the stained glass windows changing ever so slightly as one proceeds, one's perspective always shifting, being very aware of the orthogonals and hues. An insert is included with the disc showing a color wheel, divided into eight shades, rotating an eighth of a cycle each turn against a background of the same colors, an apt enough visual analogue. "Logical Harmonies 1", which closes the disc, is essentially the same except that the roles of the hands have been exchanged, the left doing the wandering instead of the right. Thomas takes it at a somewhat slower tempo, every bit as lovely as the first. I can listen to either or both for hours.

"Beatings in a Linear Process", for clarinet (Mark Bradley), violin (Mira Benjamin) and cello (Andrea Stewart) is more in line with some of Lucier's experiments in gradual and slight pitch shifting. The score calls for the strings to hold one note, the clarinet entering at a given pitch and the strings to, slowly, adjust as closely as possible to it while maintaining those original notes. This is repeated five times, the clarinet lowering his pitch one step each iteration in microtonal increments. The harmonics thus generated are utterly immersive, as is the tension between the held and moving lines occupying such close proximity. I can't locate a score for "Cello with Clarinet and Piano" (Seth Woods, Jonathan Sage and Thomas, respectively) but it seems to work on similar principles, though here in blocks of about 25 seconds separated by silence. The piano strikes a firm note and holds it as the cello plays a steady line. Several seconds in, the clarinet enters at a slightly lower pitch and the cello seems to adjust to it. The isolation of the sections almost necessarily encourages listening as a series of images, each related but carrying different shades. It also coveys a vague emotional impact, especially in the final sequence, where the downward bent feels quite melancholy. [I later located a score for "Violin with Clarinet and Piano" which appears to be basically the same work] Both are fantastic compositions and, I should mention, recorded incredibly well, each layer of grain audible.

Having only my ears to guide me, I think "Contracting Triads in Temperaments form 12-24" is performed (here, by Bob Gilmore) inside the piano, delicately and with supreme precision, plucking at sets of three strings. The effect is harp-like, very pure. As with the solo piano music, the chords, similarly paced, waver giddily between traditionally comfortable and almost justly intoned--several times I felt associations with Partch's kithara-type instruments but also koto and kayagum music. Again, by (not so) simply cycling through a pattern, Glover manages to reveal something very special. While listening to this piece, I tended to think of a catalogue of crystals.

There's a score for Gradual Music on-line, though it renders vertically on-screen. The septet (musikFabrik: Marco Blaauw, trumpet; Christine Chapman, horn; Bruce Collings, trombone; Ulrich Löffler, piano; Axel Porath, viola; Hannah Weirich, violin; Dirk Wietheger, cello) manifest as a large, pulsating cell, glissandi drifting slowly into and across one another. It sounds like an enormous organ chord encompassing dozens of clearly held, fluctuating notes, almost electronic (ebows on the piano are called for in the score; I take it they're employed here, though not cited in the credits). I pick up something of Feldman's large ensemble works ("For Samuel Beckett", say) but as orchestrated by Eliane Radigue in a particularly robust mood.

I've saved my favorite for last (though I love each and every composition): "Imperfect Harmony" (score) for solo double bass, played insanely well by Dominic Lash. As with the piano pieces, Glover gives the performer ample ability to choose his/her pathway toward the intended goal and while I've only heard this rendition, I have to think it's a credit to Lash's sheer musicality that it feels so rich and natural. The "steps" are taken in a loosely regular sequence of arco passages that last about five seconds each with perhaps two seconds between them. Low strings, just so luscious, often quavering with an intensity that has you worrying about sympathetic vibrations with your speakers or other household objects, not to mention the body of Lash's bass. I can't tell you how often I've placed myself between those speakers and just luxuriated. I detect a bit of background sound as well which enhances the sound even more, cementing it in the real world, where it belongs. While the four dyads are evenly split between ones moving upward and downward, I also feel a general down trajectory here, imparting a kind of forlorn quality. A stunningly great work.

As is the entire release. Easily one of my favorite albums of the year, of many years.

Your assessment of Glover's work is bang on.

I first encountered his work at the Quatuor Bozzini's Composer's Kitchen in 2011 where as a fellow resident I was privy to his compositional process. I can't say as I was that attracted to what he was doing when I was so acutely aware of what was going on. (Maybe that was a case my own artistic approach clouding my aural judgement though!)

In any event, when this recording came out I snapped it up regardless of my prejudice, because of my own curiosity for Glover's work and love for Another Timbre's output. Now, hearing this work separately from its processes, I realize that his work, while rather exactly constructed is full of sonic mystery.

I admire Glover's ability to be so streamlined in terms of his process and yet yield work that is so rich to the ear. While very elegant and tidy, the work offers an entire universe of sound to listen to.