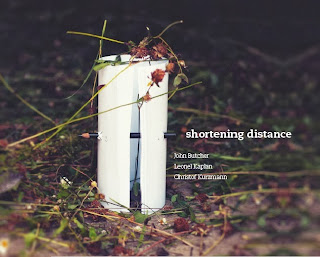 A 2012 live concert, about a half hour's worth, from the 2012 Ulrichsberg Kaleidophon Festival, Butcher on saxophones and feedback, Kaplan on trumpet and Kurzmann manipulating ppooll software.

The set begins in an almost pastoral fashion, restrained and offhandedly lyrical, and remains withdrawn and soft throughout. Kurzmnn does a really nice job of integrating the electronics, creating tones that tinge the acoustic sounds here, introducing quiet, tolling pulses there. Kaplan tends to occupy the breath/spittle zone, again seemingly "on the side", washing his sounds along those created by his companions. Butcher is the most active, the one more overtly introducing new elements, but these are always subtle, just the gentlest of prods to investigate this area, then that one. There's a brief cat-fight (muted) about eight minutes in that raises a smile, a darker, drone-ish section following; both show great sensitivity from Kurzmann in his ability to both color (he generates an arco bass sound at one point, I think) and subtly push things forward without elbowing. The trio locates this ground and explores it, never noodling, always keeping matters interesting. A few minutes form the set's conclusion, Butcher plays a surprising jazzy line that, for me, recalls Marion Brown--it works perfectly, as beautiful as it is unexpected. He repeats it several times, loosely and comfortably, Kaplan quietly breathing, Kurzmann softly chiming.

A very satisfying performance, easily recommendable to any fans of the individuals involved. 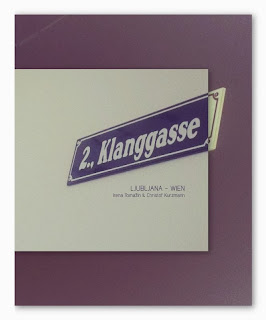 Two tracks, a 2011 performance from Ljubljana and a 2013 one recorded at Christoph Amann's Vienna studio, Kurzmann on lloopp in the first instance, ppooll in the second, Tomažin on voice and dictaphone.

I thought, given the nature of the contributors, that this might be the latest in Kurzmann's song projects, an avenue of his that I've had many problems with, but it's not at all, more free improv duos. Well, almost. The Ljubljana set begins that way; Kurzmann constructs a very attractive web of sounds; as in the disc above he's often laying out pulses, here evoking distant foghorns or muted, heavy bells. But he also uses a range from scratchy to droneish, always sensitive to colors. Tomažin, for the most part, works in territory previously mined by any number of free vocalists--Ami Yoshida came to mind frequently. It's a tough thing, I imagine--strangled squeaks and the like tend to sound the same after a while. Still, the pair manage to make it work, by and large. Near the end, you hear an obvious, arguably too obvious, Kurzmann-penned melodic line begin to be sung on the dictaphone, soon echoed live. The appending is apropos in context and, even if we've essentially all heard this before, it gives the piece a firm structure.

The Vienna set is similar to an extent, also starting out free and loose, if somehow less compelling than the earlier track. But about ten minutes in, Tomažin begins intoning tonal lines that may be in Slovenian, seeming to refer to Eastern European folk traditions (though I could be far off on that). This breaks down, perhaps unfortunately, into a freer section where both retreat into more standard tropes, yelping and staticky electronica. They go back and forth from this to tonal references and I find myself greatly preferring the latter. It's a tough tack--too tonal and it can veer toward the banal but they seem less comfortable, and more routine, in the freer sections.

I was left intrigued but ultimately unsatisfied by the sets.