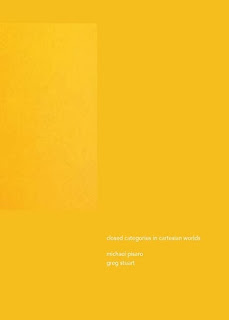 It's a rare enough event: someone creates work that you find very challenging initially and you work at it, gradually acquiring at least a decent grasp on it, coming to enjoy it deeply...and the artist continues to move forward, often frustrating you and making you go through the whole process again and again. Rare and great. That's been my experience with Pisaro's work, having first come to it via the earlier, often quite spare Edition Wandelweiser releases, making myself comfortable with them, more recently dealing with the warmer and more "melodic" (if you will) content of work from the past several years, often equally challenging, though in a different manner. Needless to say, apart from the occasional live performance, I'm largely going from what happens to be released and have no real idea how representative this is of the actual music he's writing. But then along comes "Closed Categories in Cartesian Worlds" and, once again, I found myself up against a very difficult wall to penetrate and understand.

In one sense, there's a superficial return to the spareness of earlier work. The piece is scored for bowed crotales and sine tones. It's large--four 16-minute sections, each followed by a two-minute silence--and requires standing way, way back to even attempt to fathom it as a whole. Or, I think, to just submerge oneself into and allow the structure to seep in via osmosis rather than attempting to somehow mentally limn it. Like many of his compositions, there's a near symmetrical framework within which much variation and vibration is understood to occur. Greg Stuart (who is, I surmise, just as responsible for the work's success) recorded the crotales, four long, bowed notes, and sent them to Pisaro who constructed the sine waves. Each sixteen-minute section has four, four-minute sine patterns superimposed, each mixed in a slightly different manner.

That's the rough technical detail. Experiencing it is something else again. I remain unsure of how the vagaries of a given stereo set-up affects the substance of what hits your ears here. My system here in Paris is a notch below the one I had in the States, I think and that one, while fine, wasn't of Niblockian proportions. So take all this with that caveat. It's not a piece to listen to while stationary. We're all, those of us who've had much experience with sine-based work from Lucier (to whom the composition at hand is dedicated) to Sachiko M, used to at least moving our head during performances or playbacks, creating individualized sensations of the music. More than swiveling the noggin, actually walking through the room can be rather incredible, getting the very physical feeling of passing through sound waves. This is the case here, as well. Although there are other odd effects in play. Once, when I was lying on my back, my left ear facing the speakers, my right fairly close to the back of the futon, which was against a wall, I heard about 90% of the sound in my right ear. Very strange. More to the point, it's a work that I find I really have to concentrate on to glean the structure and semi-hidden beauty therein, no mean feat for 72 minutes. As background music, it doesn't work at all! :-) And, despite the workings of the piece being clearly delimited on the jacket's interior, it's still tough for me to grasp on a more than a gross level. So, for me, there's this tension between thinking there's an important aspect I'm missing and reveling in the actual sounds, both as produced by Pisaro and Stuart and as being created in my ears as I both move and try to perceive. Those bell-like tones that emerge on occasion, for instance--I think they're more "there" in the disc than in my cochlea, but I'm not sure; they fade in and out when I move my head.

It's also surpassingly hard to write about. I do think "Closed Categories in Cartesian Worlds" is a great piece of music. Hoping in a few years to figure out why I have this notion.