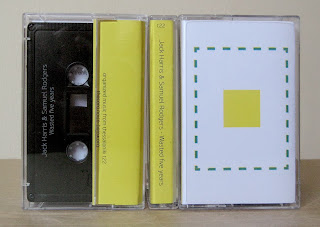 There are certain sounds for which I'm just a complete sucker. One is urban hum as heard in a large, empty room which is, I think, pretty much what you hear at the outset of this fine set. Hell, there's even a passing plane. But just that thrum of individually indistinguishable traffic sounds, noise from the buildings power systems, elevators and what not is something I can bathe in for quite a while. Harris and Rodgers, in an abandoned office space, gradually make their presences known through quiet rattles and tappings that could almost be murine (look it up). It's well integrated but, to their credit, they don't just let things lie. Instead, swirling (still subtle) electronics emerge accompanied by a thin, metallic flicker (a poked fan?) and dripping water. This activity briefly wells up into the foreground with near Niblockian power, subsides into that wonderful hum. Throughout, there's a fine back and forth between soft and quite loud but the element Harris and Rodgers contribute manage to remain delicate and defined, a tension that goes a long way toward the success of this set. They grow increasingly active and dense (though "dense" seems the wrong word, given the dry, sandy nature of the sounds) toward the conclusion, when a surprise book interview appears (over the radio?), feeds into the ambience for a minute, disappears as those faraway hums regain their space. 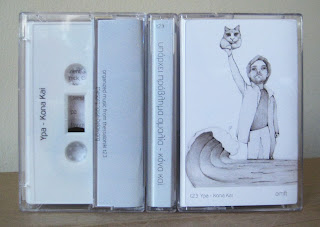 And then there's this. I've little notion what's going on here aside from gleaning that the rascally Kostis Kilymis is involved, but it's oddly delightful. Ten tracks over a mere sixteen minutes, said cuts seemingly derived from a road trip, quasi-random snatches of sounds, interactions with encountered persons, bits of conversation, etc. Opening at an implied dawn with roosters and traffic, merging into a jingle-like ditty on vibes or electro-gamelan, or something. Seatbelt instructions in front of a really cool sounding, semi-funky piece (from the radio?)--I begin to feel all Lambkin-y. A pretty hilarious, echoey recounting of some guy's Detroit adventure seeing the Stones in 1975: "About the best frigging show I ever saw in my life". Same dude launching into a whiny C&W number. I'm imagining Kilymis as the performer, an image that will haunt me. Crickets, sirens. drills. It finally ends in the cavernous interior of a train station, where an itinerant band is playing "O Sole Mio" or is that the theme from The Godfather? Or both? A coda made up of a brief collage of voices, radio, guitar strums.

A release that embraces its slightness. And it's great fun.

both are cassettes, available from Organized Music from Thessaloniki
Posted by Brian Olewnick at 11/29/2013 03:47:00 AM

hi Brian, thanks for your good words.

I'm afraid the only part I've had in the Yparxei Provlima Amalia tape (which translates to: "there is a problem Amalia", or "Amalia, we have a problem", depending on how cheeky you want to get) is releasing it. The artist behind it is Athens-based, "performs" live occasionally and has other releases as well (http://ypamalia.bandcamp.com/), but simply chooses to not put their name forward. Or they don't mind, I haven't even asked... :)

heh, I saw you name listed on the site, figured you were involved somehow. Still, my image of you singing that song will remain!

Brian tonight I saw Jack and Sam play the launch concert for this tape in the temporary project space Cafe Oto have set up, which is as near to outside as a space can be without actually being outside, plus next door to a busy tube line. A great gig, and I thought of you all of the way through it. Very much your thing. Ironic that now, on the way home from said gig I read your words on their tape...

Plus, if I had read this a couple of hours ago I could have given Kostis some real grief. He's a lucky little man....