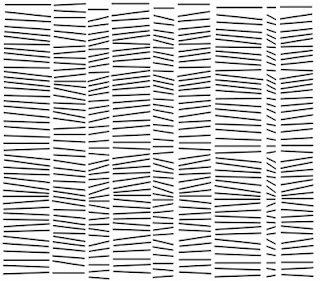 Kahn certainly has enough releases under his belt but, to his credit, lately he's often been coming up with significant variations of themes he may have overused in the past. Earlier this year, he found himself in a large room in Zurich where he had hoped to make a recording only to find a cavalcade of external sound sources, from horse-drawn wagons with their bells to a burgeoning Tamil wedding party--things falling apart enough to quash any routine recording notion. But he liked the room, the acoustics therein, the atmosphere, so he determined to make various unplanned recordings, kind of sketchbook style, remaining in the space well into the night when things quieted back down.

So we have fourteen untreated "drawings", averaging about four minutes long, Kahn using parts of his percussive.electronic arsenal but also voice, chair, plastic bags, etc. While one gains a kind of looseness not usually present in his work, one necessarily loses a bit of cohesion, not a problem if considered as snapshots over the course of the day. Sometimes he's a good free jazz drummers ("Dreaming Of", "Wait", the latter with voice), sometimes a radio tuner ("Message For"). He sings--tunes ("We Fall"). Does it teeter on the edge of too casual? Yes, I could see that reaction. On the other hand, I can imagine being secreted in the rafters of the building, discreetly listening to the welter of activity below, remaining fascinated throughout, perhaps scared when he full-throatedly yells and groans into the eaves ("Calling"). By the time "Night" occurs and Kahn lets loose with a loud, almost cantorial wail, I imagine the listener is either very aggravated or a little bewitched. I might fall somewhere between, but I'm glad he took this opportunity and happy to have heard it. 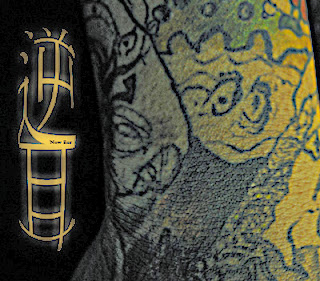 An obscure, hermetic release, this. Two discs, some 130 minutes with two version of something called "Vurnmmkied" (google returns only hits related to his recording) and a thirty-minute track called "3753", with the following commentary on the label site: "Then I got nothing to say about "Vice Versa", because whatever it is, it can be vice versa; And "New Ear" is for ears." Does "Vice Versa" = Vurnmmkied? No idea. There is an ear on the back cover.

The first disc is largely given over to a very rough static sound, more broken electronics than static as such, I think, though on occasion you can just make out what seems to be snatches of field recordings and light metallic jangling. Once in a while the sound completely drops from one or another speaker. Upping the volume increases the level of interest; my visual analogy became peering through a Brillo pad with a high-powered microscope. About 25 minutes in, it enters a looped phase, a dull, thin clang marking each iteration, fuzz gradually becoming more predominant. At times, you almost get an effect similar to early Riley or Reich tape experiments. It does on a long time though, a really long time. I'm not sure if there's actual change or if one's brain begins picking out different sounds and patterns--I think the change is there, you simply have to make the investment in concentration. Moving one's head (ears) also matters. I admit almost dying when, in the last 15 or so seconds, one speaker leaps to sudden, extremely loud, life. After all is said and done, I was glad to have heard the work--it's a tough go but worth it.

Despite the similarity of title, "Vurnmmkied II" is a different beast altogether, beginning with wavering, midrange sines and progressing to subtle, quiet vibrating patterns, almost sounding like slowed down insect life, but just as likely to be motors of some sort. The sines take off into the ether, leaving behind the faintest of taps, only to plummet back in more complex weaves, deeper and smoother, with a Radigue-ish aspect. This, in turn, fractures into ever more brief buzzes soon offset by bell-like tones, the buzzes looping into a static, simple pattern. As before, this is more or less maintained for a good while, in this case about ten minutes out of thirty. Perhaps more difficult to even possibly get into than Disc One but still strangely attractive, decidedly at variance with much you're likely to encounter elsewhere. Another drastic shift occurs in "3753", all woolly, amorphous electronics, like billows of soft e-bow feedback, finding a low branch and just languishing there. Easily the most approachable of the tracks, it may also be the least satisfying as, while pleasant, it doesn't quite provide the gristle of the first two, feeling more like a sweet proffered as a reward. 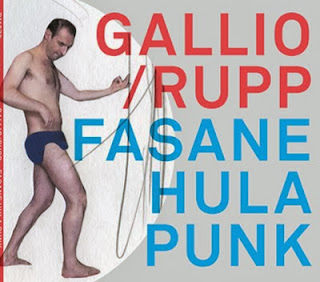 I don't think any reasonable person could fault me for momentarily thinking that I might be in possession of a disguised Diego Chamy release....

But no, we have instead thirteen short improvisations from soprano saxophonist Gallio and guitarist Rupp. I don't think I'd ever heard Gallio before and have only encountered Rupp, to the best of my memory, on the Berlin Strings album on Absinth, which I pretty much enjoyed. Here, having vainly attempted to rid my mind of the cover image, I nonetheless didn't find the music here very much to my liking, dwelling in that efi zone that, no matter how competently played (and both seem quite capable, Gallio with a good, breathy tone and ample dexterity, Rupp proficient as well, somewhere between Kaiser and Sharrock), just fails to excite me. I've seen several reviews around that praise it to the skies and, obviously, this could be right up the alley of a listener yearning for the good old Parker/Bailey days (though nowhere near as rough and rewarding as that pair at their best), but I'm not one of them.