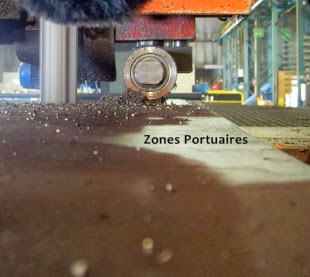 Field recordings with a difference, a two-disc set, one given over to each musician. La Casa alternates two short tracks (less than two minutes) assembled from radio transmissions in the first case, with lengthier ones sculpted from urban/industrial parts of Le Havre and Liege. And "sculpted" is the word that comes to mind. Sometimes with a (welcome) axe. I talked with La Casa recently (he literally lives around the corner from me in Paris) and, among many other things, we spoke of the well-documented difficulties I have with trying to make qualitative judgments on field recordings (not to mention other stuff!), a matter he agrees with. In a recording like this one, part of the "solution" is the sheer plasticity of the sound, the very moldedness of it. But also, of course, the choices made and the resultant disjointed narrative aspect that obtains. It's determinedly man-made but with the kind of eerie resonances that are unexpected consequences of human activity, including a booming interior hollowness in otherwise varying spaces. The listener is very much carried along here, hurtling often, the drastic changes in dynamics causing one's "aural stomach" (!) to drop. The ferocity and quasi-mancing presence in the first long track is mitigated somewhat in the second, a greater concern shown for various textures sliding across one another, accompanied at moments by wonderful, ultra-low booms, muffled but powerful. I was absolutely absorbed by it. I may not be able to quantify it, but when it comes to field recording, this is what I'm talkin' about.

The Peyronnet disc is something rather different. While it may have been constructed from the same source material (it was recorded in the same two cities, in the same year), Peyronnet seems to process the sounds more overtly than La Casa. The first two tracks, each about ten minutes long, are ok though they sound more or less like slightly less effective versions of those found on Disc One. But on the last track, Peyronnet lurches at right angles to his material, creating a vast, sighing drone that reams our space for six or seven minutes before expiring, leaving behind a empty, nighttime landscape in which you can discern soft footsteps and gently lapping water. Quite lovely. Matters settle down into an interesting kind of nondescript area, general sounds in a large space, maybe outside, machine engines and associated clatter leading to what sounds for all the world like a drumroll (I take it that it's not) shattering into soft rubble. A strange, otherwordly and very enjoyable piece.

A fine set, then, definitely worth checking out. 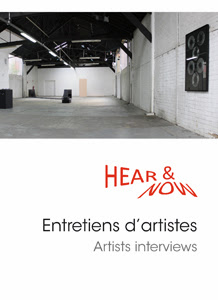 On a semi-related note comes this book with CD bearing, yes, an unfortunate title.

If I'm understanding the structure correctly, each of 26 artists (a French/Australian project) was asked what one question they would like to be asked. Those questions were then collected and all presented to each individual who answered as many or few as they chose, sometimes one, sometimes many (presented in both French and English). Of names likely familiar to readers here, you have Marc Baron, Loïc Blairon, Anthea Caddy, Éric La Casa, Jean-Luc Guionnet, Pali Merseault, Cédric Peyronnet, Philips Samartzis, Thembi Soddell and Tarab. Some provide fairly pat answers, some dig a bit deeper; some talk mostly about themselves, some about more general issues, the latter always more interesting. It's well worth the read if you're interested in the area involved (sound-art, for lack of a much better term), especially the contributions of Guionnet, Samartzis, Baron, Soddell, etc.

The disc is, naturally enough, similarly varied, fifteen tracks of about five minutes each. Many are quite enjoyable, even in truncated form: Thomas Tilly's 'Inverted Field'--just empty space but entirely immersive; the colliding spaces of insect/amphibious and human/mechanical activity of La Casa'a and Samartzis' 'Captured Space'; 'Locus', a fantastically rich meld of drones, crackle and natural sounds from Lizzie Pogson; a track by Peyronnet, 'Kdi dctb 257 [e]', also very processed as above and also eerie and excellent; a fine, diffusionist track, whistling and thrumming from Kristian Mark Roberts; and an oddly delightful baaing (lambs? goats?) with area noise and speech via Pali Merseault. But each work has at least something to offer, a solid compendium.