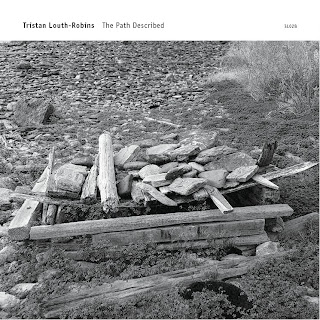 I remain at a loss how to quantify many a field recording, especially those (like this one) which form what are often called "sound maps" of a particular area. Though they're constructed in a similar manner, they strike me as fundamentally different from, for example, early Luc Ferrari, wherein various elements from around a given location were sewn together to, somehow, miraculously, form something akin to a musical composition. Louth-Robins' pieces here represent what I hear as something other. He puts together a kind of sonic walking tour of regions that resonate with him,, areas he experienced earlier in life. He records sounds along a "path described" (described down to six decimal-place latitude and longitude measurements, all in southern Australia) and melds them into an aural environment that one would experience, possibly, whilst traversing it. In the first, "Fleurieu W. (Across Two Bays)", water sounds are prominent, in very high relief, rushing and burbling in the foreground, roaring distantly. There's a narrative element, described in Louth-Robins' notes, all designed to place the listener in the spot, which of course he/she isn't, making for a sense of displacement that a little bit uncomfortable, though that's not necessarily a bad thing. You *know* the construct is artificial but it resolutely attempts to achieve a trompe l'oreille effect. I vacillate between being sucked in and being put off. Water also plays a large role in "Fleurieu E. (Across Two Islands)", though the space in which it resonates feels larger, more empty; perhaps I'm unduly influenced by the accompanying photograph. It migrates to avian and amphibious fauna, not so surprising, but something about this track moves me more than the prior one. I'm guessing it's the implied space, the air that's felt around the sounds. Finally, "Alexandrina Flux" is once again replete with water (Lake Alexandrina) though it serves more as a bed for a multitude of insect sounds and rhythms. The latter are fairly impressive and, while I've had some amount of problems with the isolating of insect sounds before, these by and large manage to transcend their origins and exist as unanchored sounds--I'm actually not sure whether that's a "good" or "bad" thing. Sometimes, as I said, I fall into it entirely, other times I feel there's been too much aestheticization (if that's a word) of the sound, preferring to appreciate it in a more naturally embedded way.

So, as is often the case, a recording like this presents me with certain problems, not a bad thing. It's recorded beautifully and I can only assume that listeners engaged in the art of field recordings will enjoy it quite a bit. I did as well, even if aspects of it (not of Louth-Robins' devising, necessarily, but of the genre as a whole) continue to nag at me.