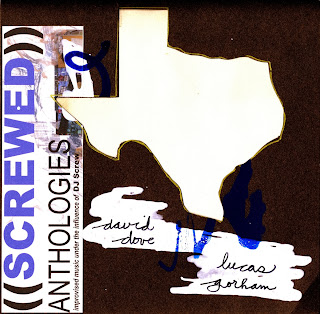 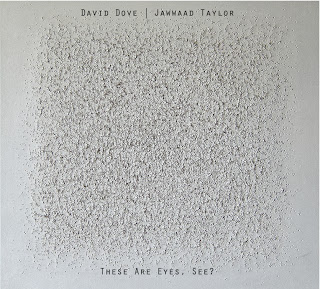 A caveat right off the bat: My knowledge about the Houston chopped and screwed culture and the music therefrom (DJ Screw and others) is minimal at best. I first heard of it via Jon Abbey at IHM and his enthusiasm had me going and checking out various tracks here and there which I by and large enjoyed, though not so much as to investigate the genre in any depth. So be forewarned...

Until I heard the recent Balance Point Acoustic recording with Damon Smith, I'd also been more or less unaware of Dove's work as a trombonist, knowing him more as a curator of events down Texas way and I'm happy to have at least partially remedied that gap. As the subtitle of the first disc states, this recording consists of "improvised music under the influence of DJ Screw", the first (two discs) recorded in 2009 and 2010 with guitarist Lucas Gorham, each musician also using electronics.

One thing that's immediately apparent is how well suited the trombone, especially in its nether reaches, sub-woofer-enhanced, is to the purple drank fueled realm of chopped and screwed (were low horns ever used by the style's original practitioners?). The first disc of "Screwed Anthologies"is a fairly spacey affair, trombone alongside echoing guitar, only obliquely referring to its inspiration, but beginning with the second cut, extracts of DJ Screw performances are heard emerging through the live music, thickly bubbling up into the sluggish, miasmic soundscape. Both instrumentalists refer to blues modes in passages that are isolated from the flowing mix, suspend there for a few moments before the beats move on. The final cut on Disc One centers on a four-note bass figure that strongly recalls that of "Bitches Brew", Dove circling it with fine imagination and Graham, in fact, presenting some chords that also seem to refer to late 60s Sharrock or McLaughlin. Without making overt references to the genre in question, the duo seems to be searching for (one of) its roots and doing a fascinating job of it. Little by little, turntable static and a recording of Phil Collins' "In the Air Tonight" which, as I discover, had been Screwed, filters through--wonderfully so--and the piece eddies onward, merging live improv with various recorded material. The overall effect is pretty mesmerizing. I keep coming back to Miles, but that might be my age showing. The opening cut on the second disc might be my favorite, beginning with multiple, fantastic, layered growls from Dove and merging guitar lines, clicks, Screw and, I get the impression, a good deal more, creating a great flow. It's not so different in structure than some of the earlier music but the elements just feel even more right, finely balanced, again with something of the feel of Milesian expansion and scale. The following track spreads sounds out even farther, thinning the textures, positioning elements more sparsely. By this time, we have the basic modus, but the individual difference in execution and choice still allow the music to sound freshly conceived. By the end of the set, though, I did find myself wondering if this particular gambit, as enjoyable as I found it to be had been played out.

Well, I'm not sure but "These Are Eyes, See?" retains certain trace elements from the above but veers off into a different, perhaps equally rewarding direction. Some skeletal vestige of chopped and screwed can be heard--in the slowness, the long drip, in the attenuated echoes of bass lines, but we've entered the backwaters here. Jawwaad Taylor contributes spoken word in an urban vernacular that acknowledges hip hop but stands apart, varying his dynamics and imparting tinges of musical lilt to his speech. He also offers a bit of fine, low trumpet playing on the first cut, muted work on the second. Dove sends his trombone into the darkest depths, well below sea level. As before, these long pieces (two are over a half hour, with a brief third to wrap things up) create their structure as they unfurl, never feeling forced (not hardly! they certainly move at their own leisurely pace). There may be a tad too much echo now and then for my taste and a vocal enhancement or two that I found unnecessary, but for the most part, I was quite happy to sink in and let myself float down to the muddy bottom. The short track that concludes the disc utilizes stronger rhythms, a more declarative trombone and (I'm guessing) extracts of DJ Screws voice, forming a tight coda to the disc. I should also mention the fine paintings by Ayanna Jolivet McCloud that grace the sleeve which compliment the music in an unusual and for me, thought-inducing manner.

I greatly enjoyed both releases. Both a nice change of pace for me personally and works that satisfy and provoke in equal measure.