A 34-minute excursion investigating the sound properties of vacant lots and nearby areas in North Melbourne, Australia and a typically worthwhile one from Tarab, whose work I've enjoyed since fist hearing his "surface drift" almost ten years ago. Suitably bleak, ranging from a dry, sandy beginning, rising in periodic crests of harsh mixtures of treated footsteps, oceans of insects and birds, dopplering vehicles and, it seems, an enormous supply of other sounds, whipped into vortices of noise. Dryness seems like the operative word for the first half of the work, abetted by deep, booming resonance. I'm intrigued by how hard a time I often have distinguishing between fire and water sounds on field recordings (if not informed one way or the other). I was confused once again for a few minutes here until the liquid nature became apparent (and after confirming that Tarab mentions a creek in his description). These somewhat placid sounds are soon overturned by a roar, possibly the same water cascading through a sheet metal lined, container, I've no idea. Dogs bark in the distance while up close it sounds like people pawing through garbage. It ends with dry steps. 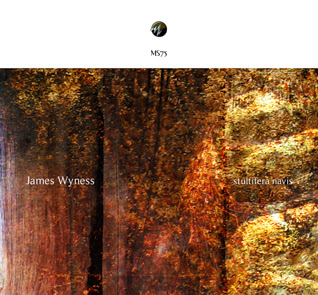 Wyness conjures up a more pastoral (if somewhat gothic) scene, though cloaked in mist and vapor. Technological sources are utilized but are embedded within the dark echoes and drips. (I admit to assuming the title referred to flora of some sort, not the satire known as The Ship of Fools!) It's one of those processed field recordings that's too wooly and amorphous for my taste, the billowy echoes, drips and muffled clanks combining into a kind of white noise that doesn't quite hold my interest. I kept thinking of the bejeweled grottoes painted by Moreau, attractive at first glance but not yielding more at closer inspection. There's a good deal going on here but it seems to sit still more than flow for its 26 minutes, perhaps Wyness' intention, but I wanted more movement and greater sound differentiation. Your Stygian voyage may vary.

Thanks for taking time to review my work Brian. I don't normally pay much attention to reviews because they usually converge on matters of taste, inclination or preferences. I know this because I review regularly. For example a reviewer might not find the sounds pleasing or this one might like more apparent movement, that one less. However if there is something bordering on factual inaccuracies I'm obliged to point it out so that my work isn't misrepresented, which is what any conscientious artist would do.

Secondly you’ve written that the music doesn’t yield much on closer inspection. I’m not sure how much we’re in the domain of perception or fact, but this piece has been played all over the world and the one thing that people have taken time to point out, leaving aside matters of taste, is that the work is teeming with detail which, on subsequent listenings, reward the listener on closer inspection. I can vouch for this because I put the detail in - it’s what I do – and I can hear it. I’m not so interested in dynamics or in balancing gesture and texture, but at any one time there are between 20 and 30 layers of sound in motion, at least.

Normally work like this benefits from two things: a full range playback system and several close listenings, none of which I have any control over because it is possible that many of us have become hardwired differently in our listening habits. I wouldn’t dream of suggesting that you reconsider your review but I feel that I have to counterbalance some of what you’ve said about my work because it seems out of place with my intentions and with the reception of the work over time and in a variety of spaces. What more can I say?

Thanks again for taking time to review my work.

Hi James, thanks for your comments,

As I've written before, for me, there's often (probably always) something problematic with making qualitative judgments about field recordings, even more so than with other areas of music. "Wy do I enjoy this one and not that one? As it happens, I was discussing this just last night with Eric La Casa and Philip Samartzis, who were over for dinner. No conclusions were reached! I sometimes relate it to my appreciation of snapshot photos--why is it that William Eggleston's work affects me so strongly, almost always, whereas the work of others doesn't or does so to a lesser degree? In sound, I find I often react very positively to, for example, Toshiya Tsunoda's work--something in his approach usually resonates with me. Presumably it comes down, as you say, to matters of taste, ultimately why I like this song and dislike that one. Very hard (for me) to say.

No doubt I miss certain aspects and/or misidentify others. Unless other documentation is provided, I can only go by what my ears tell me and they're hardly unerring. But I do aways enjoy getting feedback from the artists, especially when they take issue with my perception; I'm always learning things.

Eric was talking about intentionality last night and his own approach to recordings, questions he asks himself before proceeding, areas of personal fascination (the act of waiting, for instance) and these were very valuable things for me to learn, will doubtless be taken into consideration when I encounter his work, and that of others in the future.

Still, I imagine there will be works that I love and those I don't care for, even if I can't quite figure out why on either account.

Again, sincere thanks for the response.