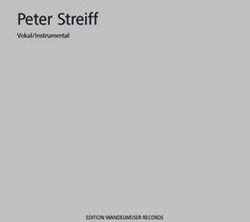 Sometimes, music reaches my desk which I genuinely feel is beyond my ken to write about--I simply don't have the necessary tools. This wonderful disc, in large part, is one such so I'll pretty much stick to just giving my impressions and make no real attempt to put the music into context. I do feel confident in saying that, though I haven't heard everything released from Wandelweiser, the music herein will pretty definitely not coincide with your impression of the label, and I think that's a great thing. All praise to Antoine Beuger for being intuitive rather than succumbing to any absurd expectation as to what should or shouldn't be represented.

Streiff's work, at least as indicated here, is widely varied to say the least. The first work is "Sechs Lieder" (1976), six short pieces for contralto (Anne Schmid) and sextet (violin, clarinet, piano, cello, guitar and harp, though all don't appear on every song). To my untutored ear, they fit into what I usually think of as post-WW II art song of a semi-ROmantic variety, though containing a gorgeous sinuosity that's rare enough. The instrumental accompaniment on some, like the second part (no violin) is thick and sumptuous, a joy to hear and nicely contrasted with the following portion, just voice and violin, the latter astringent and soulful. It's not the "type" of music I'm normally drawn to but I love this set.

This is followed by "Melodien Band II" (1983) for solo oboe d'amore (Katherina Suske). I guarantee that if I (or, I daresay, most new music fans) heard this blindfolded, the first minute or so would garner guesses of either Steve Lacy or Anthony Braxton; it carries a bit more of a soprano saxophone than oboe sound to me (the oboe d'amore is slightly larger and fuller -sounding than the traditional oboe). The melodic line is also calmly Braxtonian, though more restrained and clearer than Braxton was likely to have created, with something of an improvisatory feel. But the tones are all pure (no extended technique) and there's a sense of drive, no meandering, while still maintaining a languid air. Very different in character from the preceding suite and, again, very beautiful.

"Nur allein für deine Ohren" (2011) combines the talents of Schmid and Suske, the texts based on various poems, from Rumi to Scwitters, involving "the ambivalence of love". That's a 35-year span between these first three works. It's odd: the oboe d'amore lines sound roughly similar in general to those from the preceding piece but, while the vocal lines often trace a path alongside the reed, these latter sound to me more related to the melodies in "Sechs Lieder". I've no doubt this is some internal prejudice, so to speak, on my part. This combination, therefore, takes me a little more time to grow comfortable with, though repeated listens have allowed it to worm its way into my zone. As said above, I've no idea where this would fit into the "art song" canon, but I enjoy it.

Just when you think you have Streiff pegged, up pops "Zeitstrahl" (2010) for solo aulos, played by Conrad Steinmann. That's a word I think I've encountered in the more abstruse neck of cruciverbalism but still had to look up. Essentially a double-reed flute of ancient Greek origin, often played in paris as is the case here. It's an extremely intense sound, somewhere between a shenai and a hojok, perhaps. The composition nods to minimalism, sometimes sounding like an early Riley piece played by Evan Parker, though there's great use of hesitancy throughout, especially midpoint as it almost fragments into shards that somehow bring Cantor dust to mind, though never so regular. It's a marvelous, unique work.

Yet another shift occurs with "Studie (Sprachzeichen)" (1978) for six violins. A huge, spiky mass, seemingly more like sixty than six, throbbing and prickly. All bowed, I think, the colors ranging from the harshest and most guttural of moans to the sweetly pure, often at the same time. Dense, ornery and fantastic.

Lastly, confounding the novice listener even further, is a composition for two pianos, "Ohrspuren am Drittelberg" (2008), performed by Dominik Blum and Tamriko Kordzaia. My amusing Google translation of this is "Ear trails on mountain-thirds"; I like that. One piano is in "third tone tuning" (admittedly, I have no idea what this means" apart from a relationship with microtones), the other standard. The music is an unusual combination of dreaminess and rigor, sometimes seeming to float away on the odd (and beautiful) tonalities but then being wrenched back into strict, almost march-like processions. Such amazing sounds, though! Ultimately, over its 17 minutes, the piece wanders into the more oneiric territory, evoking Feldman now and then, including a wonderful, near-unison passage of steady up and down progressions in that luscious combination of tunings. Another outstanding work.

I'm sure far deeper appreciation can be mustered by someone more versed in the field(s) occupied by Streiff, but I'm extremely happy to have been exposed to his music, very exciting and captivating work and one of my favorite releases from 2013.