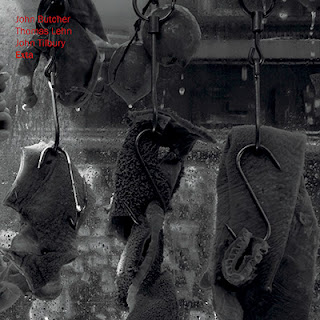 It's not a rational approach though I'm probably not alone in this--when I see Tilbury performing in improvising ensembles outside of AMM (or in solo contexts), I tend to tense up. Silly, I know, but I hold his music in such reverence that I want it (as though it's my choice!) to be experienced in only ideal settings. Also the fact that a decent amount of his recorded work in such groupings hasn't struck my ears as being particularly successful. In any case, such fears were largely swept aside by this release, which is very fine indeed.

I do wonder if there's a tendency on the part of his younger companions to defer a bit to him; maybe not, but it's not an unreasonable suspicion nor necessarily a bad strategy. Certainly, Butcher and Lehn provide Tilbury ample space in which to be herd, never cluttering the playing field. Tilbury, whether working loudly or softly, has his way, a very steady step wherein each sound he produces, one feels, is chosen for its depth, appropriateness within the context and sheer aural beauty. Tapping a dampened string or playing a trademark arpeggio, there's little mistaking him. So Butcher doesn't let loose with the violent, tremendous cascades of notes nor Lehn erupt with the full panoply of noise that his synth can generate. So the five tracks are quieter than not and, personally, I love hearing both Butcher and Lehn in quieter mode. I'll go a bit further: I enjoy the music here more than the releases from the Prevost/Tilbury incarnation of AMM. Both saxophone and synth provide a freshness of approach that's bracing and quite often, the sheer sound of the three together is unique and gorgeous. Tellingly, I find the strongest cuts here to be the longer ones, where ideas and combinations have time to unfurl and propagate. "Cor", at 19 minutes, is breathtaking at times, extraordinarily rich; I sometimes imagine Lehn forming tendrils keeping Butcher and Tilbury in contact, creating a wonderfully alive, writhing tension. Similarly, "Iecur" charts a great, empty space, Butcher sounding the occasional sonic probe, Lehn limning the fog-enshrouded floor and walls, Tilbury resolutely, if carefully, treading onward; excellent work.

Sure, not everything works perfectly and there's a synth burble or two I could have done without, but overall, "Exta" is supple, thoughtful and all-around fascinating. 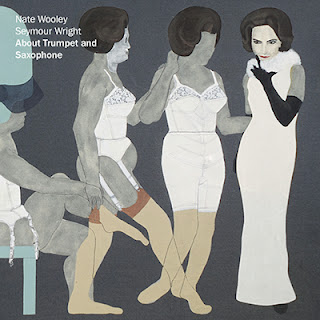 For some reason, it's taken me forever to get around to really hearing Wooley. In fact, I think the last, perhaps only time I really got an earful was on the Blue Collar release on Rossbin about a decade ago where I likely pegged him as part of the Vision Fest/High Zero affiliated crowd, doubtless an oversimplification at best. Doubly odd as we shared a hometown for a good while. In any case, I'm sure I've missed a bunch. Wright I've heard much more of, though sporadically, including a couple of times this past year at Instants Chavirés. My sense of his work, or part of it, was an insistence on dealing with his instrument, shall I say, saxophonically, not as "just" a metal tube, acknowledging its history, not attempting to lose its inherent nature as is often the strategy employed by saxophonists within contemporary improvisation (I think Butcher has been contemplating this for quite some time as well). I don't know Wooley's work nearly well enough to hazard whether he thinks along similar lines and this recording doesn't clear those particular waters.

Nine fairly contained tracks wherein the pair quietly occupies space somewhere to the left of efi and the right of eai. Sometimes the brevity works quite well, as on the first cut, forming a concise, sharply-drawn statement. Other times, as on track 7, it seemed to me that ideas were just beginning to gel and I'd have liked to have heard more exposition. The techniques employed are almost always of the extended variety, though nothing that hasn't been encountered on many an occasion over the past few decades. I'm sure this is well understood by Wright and Wooley and they're simply attempting to construct solid work using those tools. I found it successful about half the time, not caring for sections when the activity felt forced, when there needn't, to my ears, have been anything said but one or the other insisted on saying something, of pushing. Then again, maybe those moments were a prerequisite for subsequent passages that gelled. Frustrating, though maybe that' a good thing.