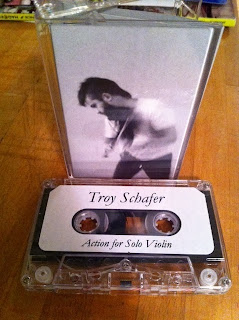 Schafer's work, a cassette release, seems to be almost as much about dance/movement/performance as music. The score includes "text and photos of my moving body" and his notes indicate concern with, among other things, "the weight of an arm". I find it almost obligatory to, when listening, imagine Schafer in motion, swinging the violin by its neck around, behind and under his body. Though bowed sounds surface every so often, the overriding impression is of pizzicato, very crisply recorded, yielding extremely prickly sensations. The sound field is very full, quite active but somehow manages to avoid feeling cluttered or overly busy, the cascade of plucks having a very natural (always irregular) cadence as though they were generated by simply sweeping the instrument through the air, the strings activated by thousands of invisible fingers. It's quite unusual and effective; I found myself wondering how it was that I enjoyed this far more than, say, any quasi-similar (not similar at all, really) music I've heard by, say, Philipp Wachsmann. The sense of a person moving in space, sounds appearing as part of this process, as a result of the arm weight, gravity and so on but in an almost ancillary manner, is striking. I don't know Schafer's music otherwise and from what I can glean on-line, this might not be typical of his work (though the notes mention that this recording was his seventh performance of the piece, so it's clearly a focus of his), but it's very much worth checking out.

You can hear for yourself at Schafer's bandcamp site