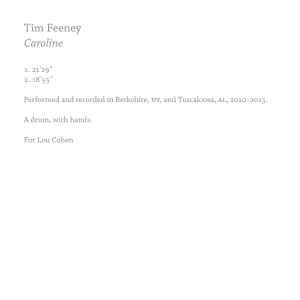 The image above gives you every scrap of info I have about this recording. I like that and like the release very much.

I'm guessing most of the sounds are in fact produced by hands, possibly holding something, sometimes (pine cones, blocks of styrofoam, scrub brushes, who knows?) though not, I don't think, drumsticks, brushes or bows, all in action on a large, vertically-oriented drum. Think of it as a pared-down, more intent (and intense) version of the finest Le Quan Ninh performance you remember and you'll be on the right track. Feeney is pretty single-minded here on each track, both of which benefit from being played back at high volume to revel the multitude of incidentally generated layers within, underneath the surface swirl that otherwise dominates. You can feel the action of Feeney's arms quite clearly in the first track, the back and forth as he scrapes whatever it is he's holding over the drum head; it's the interaction of those "top sounds with the ancillary ones, the low bumps that arise at the terminus of each motion and the beginning of the next and the faint, almost indiscernible, high, whistling tones. There's an abrupt break midway through, jarring, jagged-edged Pisaro, When the music returns, a deeper, more liquid sound is heard, perhaps a bit more frenetic, though maintaining the general rotating-in=place structure of the first. Quibbling, I might have wanted this second portion to be three or for minutes shorter, but hell, it's fine on its own.

The second track sometimes sounds like it's being produced by high-pressure rubbing; there are multiple occasions when, blindfolded, I might have guessed I was hearing a deeply=bowed string bass. Other times, I get the impression of a heavy object being rolled around the drum's perimeter. Whatever the reality, it once again sounds great and agin one picks up all sorts of subsidiary noises, a huge volume of them echoing into the distance as far as you can hear. There are two breaks this time. After the second, matters subside into deep moans that sound more cetacean than anything else, really wonderful, lasting to the end of the piece (the first track begins and the second ends with about a minute of silence).

An excellent recording, rigorous, expansive and even sensuous. 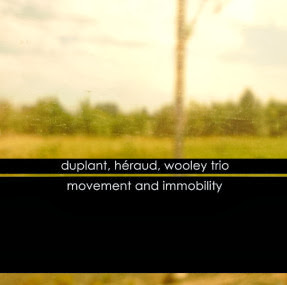 Duplant (here on electroacoustic devices and percussion) has made a number of long-distance recordings in recent years, some more successful than others, some improvised and others, like this one, using some kind of directional indication if not a score proper. On the first of the three tracks here, Héraud (on alto saxophone) and Wooley (trumpet) float languidly along an electronic stream for the first few minutes. You think you know what you're in for, but smooth base suddenly disappears, replaced by shuffling percussion and, off and on, rougher, deeper electronic layers. I'm reminded a bit of George Lewis' classic "Homage to Charles Parker", but more hesitant, more admitting of disjuncture. Wooley contributes some fine, harsh buzz, allowing the piece to retain an edge--strong track overall. Another surprise, given what I tend to expect when Duplant's involved, surfaces on the second cut, "Climate Disruption", in the form of his insistent percussion, a percolation of sorts, hollow and resonant enough to cause me to wonder whether it might have been produced by key tapping from either Héraud or Wooley, but I think not. It takes on a semi-rhythmic character, not so many worlds apart from West African drumming. As I said, a surprising, but very welcome element to encounter in this neck of the woods. The final track turns harsher still, Duplant muted but troubling, the horns shrill but not overbearing, subtly piercing long tones. Some snare action yields underground turbulence. Once again, a steady rhythm enters toward the end, a tolling sound that lends a processional feeling to the work, supporting the keening horns.

A strong release, venturing into byways not often taken, well worth checking out. 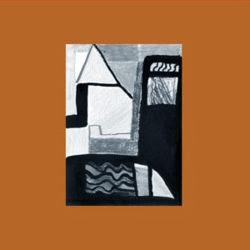 Within the sleeve of this LP the listener will find a small packet of colored cards pinned together, the front bearing the printed inscription "3 Listening Events", each of three cards (one per track) listing a series of banal, almost Beckettian activities. Suggestions, one assumes, on how to occupy one's time while listening. The third reads, "In chair at desk. Roll batteries, spin coins. Click, whistle, and wobble along with these. Eyeball disfigured sculpture, stare it down. Tap desk twice, light a flame and wheeze. Let arms slump, remain hunched. Wait for the final click."

I admit that I enjoyed these dour shards of advice a bit more than the recording which traffics in a kind of throbbing drone adorned with grainier ornamentation, all perfectly listenable (master by Graham Lambkin, incidentally) but not to my ears so gripping or, given the inclusion of those cards, as isolating or contemplatively depressing. The throb is pervasive. In the first nocturne, it's accompanied by obscure creaks, snaps, rattles and hisses, all creepy enough but not quite so rich or deep as to engage for its length. The tonal content of the pulsations recalls Fennesz and the like and while the darker tones are welcome, I found myself wishing for a release from the constancy of those "chords" which too easily connote the mysterious, macabre, etc. Of course, oppressiveness may have been the desired goal here. The shorter second track fares better, if only due to its concision as the elements are roughly the same, though its more intense, churning quality helps a good deal. Side B is occupied by the final nocturne and, in part, I find it to be the most successful. The drone is raised from the murky depths and some of the ancillary sounds--various static forms and other intrusions--intersect with the throb in interesting ways. On the other hand, there's also a profusion of loopy synth lines flitting about which which I could do without, but that's a general pet peeve of mine with regard to that "kind" of sound. Ends with a good, solid click.

So, not exactly up my alley but dystopic dronage fans will probably enjoy it just fine.