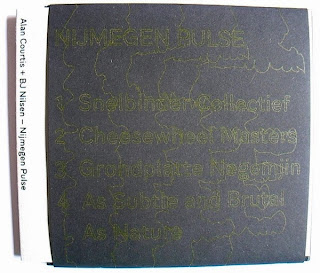 A set of four pieces by Courtis (depending where you look, he uses Anla or Alan) and BJ Nilsen (who worked with Stilluppsteypa, among others) compiled from field recordings done in and around Nijmegen, Holland. They're quite unassuming on the one hand, quiet and unimposing, though there's a bleakness about them that sends a small chill into one's vertebrae. THe opening piece is next to silent, just a slight urban hum, peaking (about an inch high) a little over halfway in, subsiding; almost nothing and quite satisfying for all that. Numerous birds greet the ear on the next cut, squawking but softened a bit, sunk into the background wash of distant traffic. Church bells enter as the bird call become lighter and, possibly, one hears electronic work by the pair, but it's at a low enough volume and is so hazy that I'm not sure it's direct contributions or altered (maybe unaltered!) site recordings. In any case, it's hollow, metallic and foreboding--very effective. More distant, empty space begins the third track before, a few minutes in, random, irregular drips of water appear, metal banging, muted, around some dark corner. Human voices and non-mechanical activity finally seep in on the final track, soon replaced by agitated, scurrying sounds. As always here, contrary to many hyper-realist field recordings, things remain mysterious and slightly blurry, the sounds having a rounded aspect as if only dimly glimpsed. Even the wind, howling unobstructed through gray passageways, goes in and out of range, as if heard from deep beneath the city. Only at the very end does a drill begin to roar, boring in on the listener, drawing ever closer, reaching just the other side of the wall before it too expires.