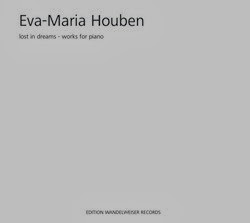 Two pieces, one as delicate and beautiful as we've come to expect from Houben, the other a rather surprising suite.

"traumverloren I für klavier (lost in dreams I for piano)" (2010) has a disarmingly "simple" structure: a single note is played, softly and steadily several times (between four and ten, I think, though I could be wrong) followed by a chord of only two or three notes. The single note varies as does the number of iterations, intuitive as far as I can tell though perhaps there's a plan. The chords seem to stay in the general pitch range of the single notes. That's it, the kernel repeated over 33:40, each new section commencing just as the previous one fades away. A great example of the imaginative use of a seemingly non-complex idea, offering wonderful contemplative moments. A jewel.

"klaviersonate nr. 10 (sonata for piano No.10)", subtitled, "les cloches du songe (traumglocken - dream bells)" (2013) is, at least with my knowledge of Houben's work, unexpected: a set of five piece composed "in memoriam" to five composers--Mussorgsky, Enescu, Schumann, Liszt and Messiaen. How the music relates to these composers is beyond my ability to determine, I have to say, save perhaps for the Messiaen tribute. The basic structure in the Mussorgsky section isn't hugely different from the prior piece. Here, a single note is struck and, while it's still resonating, a quick, two note phrase, in a higher pitch, is played. This is at a fairly loud level, the notes shining brilliantly, sounding very much like a certain sequence Tilbury sometimes employs. The Kiev Gate, maybe? Enescu merits a gentler approach, clipped notes contrasting with sets of sustained ones, in sequences that suggest a slow dance, ending with deep, troubled single tones; very moving. For Schumann, Houben presents a two note pattern, the first always the same, the second lower at first, each sustained about twelve seconds, then higher in a quicker pattern. The bells referred to in the subtitle seem prominent here and, one realizes, in all pieces of the set. Liszt's homage begins in appropriately grand style, two loud notes followed by a single, low one. This patterns varies to a two-note one, back and forth, each time the general pitch changing. Again, there's an amount of stridency one doesn't normally associate with Houben, but it's not overbearing at all, more like clearly heard church bells in pure, cold air. Finally, Olivier Messiaen receives the kind of ethereal, sublime, suspended chords he deserves, not overtly imitative but acknowledging his presence. They hover, appear at irregular intervals, tinge the space and vanish.

A very touching, beautiful recording, one in a long line from Houben. 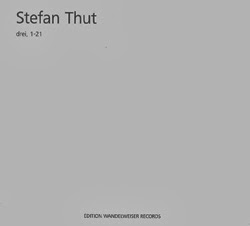 A tough nut. Twenty-one pieces, each exactly 3'06" long, recorded independently in three different places at three different times over the course of a year, by the trio of Johnny Chang (violin), Sam Sfirri (melodica) and Jürg Frey (clarinet). The score consists of twenty-one sets of six configurations of from one to three horizontal lines, arranged in two rows of three. So, for example, the first (at least the one in the upper lefthand corner) has an array of two, three and three lines over two, three and one lines. The last, using the same positional logic, is three, one and one over one, two and two. I don't know whether or not any other instructions were given with regard to interpreting the sets, but here the playing is uniformly quiet and spare, each musician contributing soft, grainy, single note lines and leaving a great deal of space in between. I take it that the recordings were done in isolation, with no one knowing what the others had played, where they had placed their sounds within each mini-structure, but I suppose it's possibly the tracks were laid down sequentially, first Chang with his grainy bowings, then Sfirri's gentle melodica and finally Frey's soft, high clarinet. These issues aside, I prefer to simply listen and experience but that's a tricky business as well. The material traces are so scant, such (lovely) wisps, that I find it more conducive to listen as one tries to look at a faint star, "from the corner of my ear", allowing the sounds to just tinge the room. This works quite well, though I'm aware I'm likely "missing" something, unable to grasp the lacy organicism of the composition. A good challenge, happy to grapple with it. 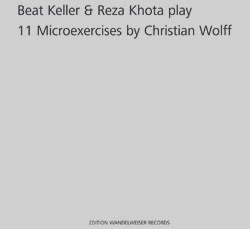 In the notes, Wolff writes about being asked to compose a piece consisting of no more than 100 notes, doing so and enjoying it enough that he wrote a number of them. "I don't worry too much about intensity of focus; it's more about transitoriness and catching what's going by, then letting it go." So we have eleven of these pieces (plus two second takes) rendered by a pair of electric guitarists with roots in jazz and rock, histories that are by no means hidden here. Some of the tracks, like the opening "Exercise No. 12", sound "wolffian", if you will--a series of tones that manage to be both abstract yet highly lyrical, more difficult to grasp than you think they should be. On the second, "Exercise No 1", one of the players introduces brief lines that strike me as jazz-phrased and the result is a bit jarring. I'm guessing a phrase like this isn't specified in the score (I could be wrong!) but is allowed for on the part of the performer. I'm not sure I go along with the choice though, if choice it was. This dynamic surfaces throughout the disc, most overtly in the second take of "Exercise No. 22 (Powerchords)" where, at least, they're open about it! The insertion of a given vernacular should, I'm sure, be countenanced by the score, it's simply a question of taste what one chooses to utilize. I'm reminded of the well-known, hopefully not apocryphal story of Feldman's admonition to an orchestra member playing one of his graphic scores, wherein there was the instruction to play three notes. "Not those notes!" Here, there's something of a Zornian collage feeling at times. Not always, by any means, and a number of the pieces work, for me, very well. On "Exercise No. 8d", for instance, the lengthiest of the cuts, just under twelve minutes, some smooth drones that wouldn't be out of place on an old Fred Frith record sound excellent, perhaps my favorite piece here.

I'm forced to wonder how I'd react if I didn't know these were Wolff compositions. I think differently, which is, of course, unfair but hard to avoid. As is, I went back and forth, trying to keep in mind the transitory approach but being, on occasion, jolted out of that frame by the idiomatic portions. A mixed bag for me, overall, but well worth hearing if only to see one of many possible interpretations of Wolff's music.