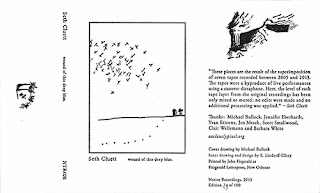 A wonderful cassette recording from Cluett, fashioned from seven Dictaphone tapes of earlier performances of his (2005-2013) without otherwise being processed or edited. If there's more to it than that, I've no idea, but the effect is marvelous. You get a sense of several discreet entities, each with their own "goal", inhabiting, for a few moments, the same space, gliding past one another. I imagine glass panels, encrusted or imbued with various substances, arrayed adjacently, the light passing through forming connections, transmitting colors and shadows, but otherwise separate. There's a very organic progression here, impossible to tack down but feeling entirely natural and even, paradoxically, space-specific. The flow is fantastic, always convincing, forever encountering strange and fascinating vistas, letting them go, glimpsing new ones on the way in. The elements themselves vary widely from throbs to scratches to howling air and far more, yet they manage to embed themselves into the same, gnarly, bumpy fabric. 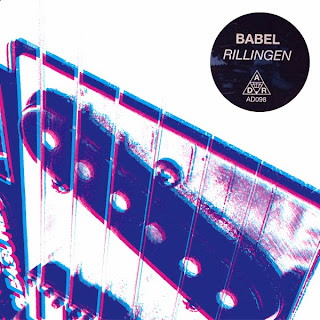 Babel being the nom de musique of Toronto-based guitarist and improviser Jakob Rehlinger.

The four tracks seem knot together into a kind of symphonic form, the first three totaling some 25 minutes, the last 37. The general sound is of an electric drone/throb, a few parts the Fripp of "No Pussyfooting" (sans Frippertronics), a few more of a sunnier version of Godspeed You! Black Emperor. The first three sections are all about vastness, sometimes a bit overdoing it (the closing wind sounds on the third sections, for example) but generally resting in a rich swirling sound area that's not unpleasant. Rehlinger takes the opportunity to tease out more structural strands in the fourth part, separating out various sonorities, allowing more breathing room while still maintaining the kind of simmering ecstatic output heard earlier (here, I think of Loren Connors at his most otherworldly and Branca rears his head as well). I enjoyed this "movement" the most, like the shifting layers and changes of emphasis, though I still wouldn't mind either hearing more structural rigor or, conversely, letting things flow out with very few constrictions.

Listeners keen on the above mentioned musicians might derive a good amount of pleasure from this release. 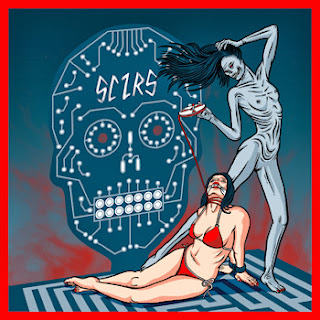 "Séquelles" begins as a jungly-drone piece with overtones of Sun Ra, nicely messy and dirty on the one hand but with electronics lines that, presumably with intention, resonate with science-fiction-y references. It flits from scene to scene, a little too glibly for my taste, encountering some interesting areas along the way but not seemingly too concerned with mining them in any great depth. "Infra Novæ" is more concise, inhabiting an area of brushes, distant ringing overtones and intermittent detritus; again, the grime works well adjacent to the shinier elements, the whole package forming into a fine, gritty ball. There's a quasi-rhthymic feel to the brief "Active Debris Removal" which, abetted by rather bloopy electronics, doesn't amount to much apart from sound effects. The concluding "Bloc Resperatoire" fares better, the two elements that marred the preceding track sublimated into a larger entity, evoking the work of Voice Crack and similar bands; the kind of piece that could have appeared on Four4ears a while back.

About half and half for me then. At best, it's far better than the cover. :-)

You can hear it at Bandcamp

or order it from Tünel

if it's that good,i'd burn it to cd