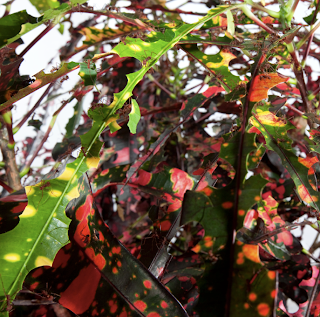 There have always been some musicians whose sheer musicality, at least how my brain perceives same, just resonates with me--everything just sounds so good, retains some inherent quality that I just love. Monk and Don Cherry were good examples of that in jazz, Keith Rowe has it, Lambkin too, some basic approach that simply syncs up quite well with what I like to hear. Often, it seems to involve an exquisite (to me) balance between a fine sense of the melodic and a healthy amount of abstraction. I'm starting to think Guthrie is in that crowd. I think I've enjoyed just about every new release of hers more than its predecessor and "Codiaeum variegatum" (issued on LP) continues that trend, in spades.

Right from the start ("Branching Low and Spreading"), with the beautiful, seesawing arco lines (courtesy bassist Joseph Digerness; the album also features some cello by Dan Binschedler), merging with distorted French horn and ambient sounds, that balance is achieved. There's always a sense of song regardless of how fractured the line becomes, the field elements somehow acquiring the character--absolutely obliquely--of the bass lines and the horn laments. Things are further dissolved in "Strongly Leaning with Irregular Crown", sparser bass turning over melodic duties to flies, then semi-practising cello. When the horn enters, there's a wonderful feeling of listening in on activity in a bower, gradually understanding that you're hearing things over a not entirely functional mic nearby as static interferes, providing a really fine and unexpected scrim, negating any over-pastoral quality. Each of the six tracks (all bite-sized between five and nine minutes) offers a distinct aspect, a unique range of sounds even given the common presence of the horn and site-recordings. "Rough Above with Uneven Base" stands out somewhat in its use of repetitive cells, nodding to mid-60s Riley and every bit as strong in its combination of rigor and elastic spaciness. The final piece, "Persists into Winter", might be both the richest in terms of depth of sound as well as the most abstract, a dense, somehow forward-moving mass, a thorny cacophony borne along by low, horn bellows beneath.

A really superb effort--with the Cluett reviewed earlier, my favorite release of this new year.