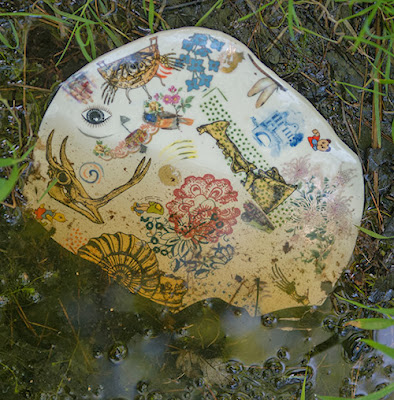 Bullock, while better known as a bassist, has delved into electronic composition before and does again on this LP with two side-long pieces.

"Trompettes Marines" begins with an achingly lovely and forlorn descending line (on synth, I think, though it has Theremin qualities; if thats a somehow transmogrified bass, I'm floored), gradually accompanied by sympathetic bowed bass, distortions of the original line and vague field recordings. A maritime theme pervades, with gulls and (abstracted) wave crashes but, as Bullock notes, he's going for a cinematic quality without being especially narrative and, indeed, the mood is dreamlike and mysterious, those elegantly drooping notes always somewhere within, tingeing the ambience with a forlorn aspect. Lest things get too moody, the sound of vinyl run-out grooves appears, creating necessary tension between the modern world and the sense of the archaic brought to mind by the titular instrument. The work maintains a singular sound sensibility throughout, very impressive; lovely, immersive music.

Side B, "Figures Without Ground", is something else again. My very first reaction, unavoidable, was hitting on mid-60s Sun Ra, the era of "Atlantis" and "The Magic City"--was that the clavioline? Well, here it's a "Doepfer-format modular synthesizer" and apparently most of the work involved had to do with constructing the patches, the synth then producing the sounds (in one take) "with only very minimal involvement" on Bullock's part. It's the kind of sound, a somewhat loopy, tendril like tone on top, a buzzily growling one snaking below, that in most case would put me off but...damn it, it works here. I have to speculate that part of its success, for me, is exactly the non-intentional aspect alluded to by Bullock, the sense of the music being driven by internal or, on the other hand, environmental contingencies rather than human agency. It takes paths that seem very non-gestural. It veers into a more feedback-y stage with accompanying static for a while before flipping back into its insane yodeling. I can easily imagine this piece irritating many people but I got a real kick out of it.

Yet another in what's becoming a lengthy string of adventurous and excellent releases from Bullock.