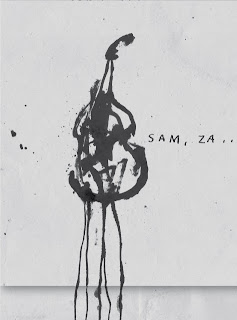 A solo recording from Grom, who's credited with both bass and voice, though I'm unable to differentiate the latter; I assume it might take the form of deep growls that merge with some of the low arco work here, which is quite impressive. I admit to being a total sucker for bowed bass from the depths and the first track here, "T.G.V.S." (all titles are initials) lands squarely in my comfort zone, so rich and robust, so dark and darkly melodious. Could have listened to that for a long time...Grom returns to that area, more or less, several times over the course of the nine tracks here and actually spends almost all of his time in what you might call the lower "half" of his instrument. He's an active player, rarely interested in silence or allowing notes to soak into the space, more likely to be nimbly scurrying about but never descending into mere flash. All of the tracks carry an air of serious investigation with, to me, a kind of post-efi feel. Each also maintains a focus on a limited number of attacks, generally a rewarding strategy. Mostly extended technique of one sort or another with occasional dips into standard bowing, always revolving around the agitatedly somber. Hard to describe further. Put it this way: it's the kind of recording you might have hoped, years back, to have heard from Barry Guy but this is much, much better. 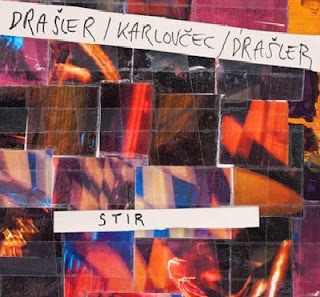 I'm certainly the wrong person to review this album, so please take the following with several grains of salt. This is a free jazz trio, pure and simple--bass, saxophone and drums, a selection of five live (I believe) tracks, almost 80 minutes of music. There's no indication of the recording dates, though I take it that it's within the last few years. I mention this because, frankly, it sounds as though it could easily have been recorded anytime from, say, 1975-1995. To my ears, there's simply something tired here, like an Emanem release that somehow never saw the light of day, or a routine Vision Fest performance. Karlovčec (on soprano and alto, I believe) plays ok but really indistinguishable from any dozen others in the field, while Jošt Drašler (bass) and Vid Drašler (drums) are simply serviceable. The structures of the improvisations are routine as is the interplay. Like many such ensembles, when they work up a head of steam, the heat generated can carry them for a bit but there has to be more to it than that, no? Given the emulative nature of this music, the listener is almost forced to imagine the "same" music done in the mid 70s by, oh, Roscoe Mitchell, Sirone and Philip Wilson. Except it would have been so much more vital and alive.

If all of the above says to you, "Damn, sounds like something I'd love!" then by all means have at it. Not for me, though.

Hello Bryan thanx for the reviews. Few corrections thou ... both releases are released by Zavod Sploh (wwww.sploh.si) in coop with L'innomable. And the saxophonist of the trio is Marko Karlovčec, Jošt Drašler plays bass and Vid Drašler drums ...

Apologies for the mix-up--corrections made, thanks