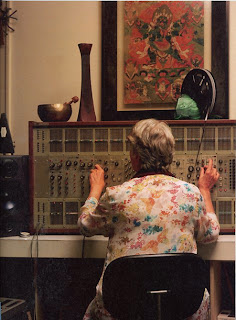 I went last night to a performance (of sorts) of Éliane Radigue's 'Trilogie de la Mort' at the Le Cube arts center in Issy, just southwest of Paris (thanks, Jacques, for cluing me in about it!). The venue was a room about 25 x 40 feet, high-ceilinged, with a very nice sound system, I believe with four speakers. Think of it as Experimental Media with a somewhat lesser sound system but without the traffic sounds of Centre St. wafting in. There were several chairs scattered around but more mats, cushions and pillows for floor-oriented listening. Emmanuel Holterbach was manning the sound system, playing the three discs of the trilogy with short breaks between.

I'd never come close to catching up with Radigue's CD releases in recent years, only coming to own four of them and not this work, so this was my first experience of it to the best of my recollection. More importantly, it was my first opportunity to hear her electronic work in a setting like this: a fine sound system and me being able to listen, undistracted, for over three hours and it was pretty revelatory. As much as one may try to do so at home, there are always things that interfere with the concentrated listening process; better to be in a dark room, pinned down, as it were. Holterbach made the excellent decision to play the pieces at a medium-low volume level; the music was quite present but not overwhelming. Where the balance point was between the sonic detail (more accurately, the relative presence of individual layers) in the original recording and what Holterbach chose to accentuate, I have no idea. But those layers were absolutely fascinating to to hear and follow. I can easily imagine the casual listener spending a few moments with the work and saying, "Eh, it's just one undifferentiated blur" but he would likely say the same of an Agnes Martin gray painting. Those paintings went through my mind often last night while experiencing Radigue's endlessly unfolding music. You realize, quickly enough, that there are at least five or six elements in play at all times, not to mention the enormous number of ways they interact. The electronic pulses have varying periodicities but, oddly, don't result in complex rhythms so much as simply passing "species" of sound, rubbing against one another, producing a momentary environment, moving on. You also, in the first section, begin hearing ghost melodies and aren't sure if they're "there" or in your head (no difference, of course). I thought I detected an extremely faint orchestral section at one point; I've no idea if such a thing existed. The grain would shift now and then, feeding in some well-chosen, gravelly rumbles to offset the lusciousness of much of the synth sounds. You realize the delightful tension between the obvious amount of painstaking construction involved versus the entirely natural flow she achieves. The subtlety mixed with the complexity to an astonishing degree.

In the third part, the references were more overt; even if you couldn't discern the precise source, you knew you were hearing something on the order of Tibetan ritual horns, double-reed choirs, various vocal chants and much more, as Radigue delved more directly into ways various cultures dealt with death. I suppose, given a choice, I preferred the earlier, more oblique approach in the first section, but each had its own areas of fascination. Given the nature of the space--dark, relaxed, fairly soft music--it wasn't surprising that several audience members drifted off to sleep. In this section, you could hear long steady breathing indicative of slumber from one quarter, muted snores from another. They fit in perfectly with the music. At several points, Radigue introduced some extremely low, fluttering pitches; were I lying on the ground, I would have felt sucked under, buried.

Perhaps more than anything else, apart from a renewed respect for Radigue's art, it was also a confirmation that, in many other cases as well I daresay, there's still so much to be heard, that there's always the likelihood that increased, determined listening often reveals more and more, at least in works of this caliber.