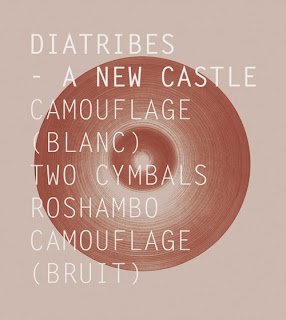 Diatribes keeps getting better and better. I had the good fortune to catch them live here in Paris last year, an excellent performance that featured one of the pieces (at least--one that I recall) heard on this disc, "Two Cymbals". The pair (D'Incise and Cyril Bondi on cymbals, bowls, objects and electronics) have found a very lovely balance between an asceticism of means and an often surprising richness of resultant sounds.

They take their time, which is one important point. Of the four pieces here, two ("Two Cymbals" and Roshambo") lasted substantially longer than I expected and this was giddily enjoyable, as I was continually worried they'd stop before my pleasure centers were satisfied. :-). The album is bookended by two variations on a work titled "Camouflage" ("Blanc" and "Bruit"), the first a layering of ringing bowls and sizzling metal (cymbals?), underlaid by low, fluttering electronics, everything in very slow surges that drop out unexpectedly leaving an icy tinge, a fantastic balance of flavors, attenuated but also retaining a strong tension. The second variation is indeed a bit noisier, darker, the rumbles more apparent, the rattles more sinister; equally powerful, again a great mix of elements, here a very brittle-dry vs. rounded-metallic antagonism. "Two Cymbals" is the piece I remember from the concert--it fascinated me then and does so now. It's made up of irregularly overlapping sequences of regular, quickly-paced taps on, I take it, cymbals (though it various stages of preparedness, mutedness, etc.), very "simple", in a way. Generally, one player begins, taps steadily for a varying number of beats, is joined at some point by his collaborator, one stops or the other, there are periods of silence, one recommences. The tempo remains consistent, the quality of the tones changes subtly and the number of beats varies. I'm not sure if it's scored or "improvised" within given parameters. But it sounds tremendous, perhaps recalling Tom Johnson but with an anticipatory excitement not always heard in the older composer's work. And they stay in this wondrous realm for almost 18 minutes; I could have lasted another 18, but it's probably a near perfect length in fact. A unique and very beautiful piece of music. "Roshambo" is the longest and also most complex track here, the sounds straddling the divide between rhythmic and not, D'Incise and Bondi's contributions staying really nicely discreet from one another, very much like a super-imposed conversation in which each part somehow remains intelligible. I'm curious if this was entirely improvised or not, hard for me to tell.

"A New Castle" is excellent throughout, a real joy to experience, radiating some serious intelligence. Check it out. 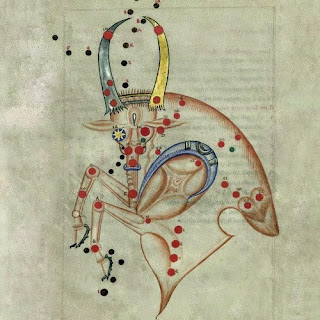 Very fortuitously, an interview with Strickland appeared on the Caduc site during the days I was listening to this disc. It's Strickland's first release and I knew nothing about him so was forming (possibly ill-advised) notions about his work strictly from audio evidence, some of which, happily, weren't too far out of bounds, though possibly averse to Strickland's intentions. My overall feeling about the music was that it related to acousmatics, particularly the work of Bernard Parmegiani, a kind of maximalist approach where myriad forms and sources were absorbed, sliced and diced and regenerated with great concern for dynamics, textural shifts, etc. It turns out that Strickland did indeed study that area of music although he hated "everything about it"! He also recounts his initial exposure to contemporary eai via the classic Erstwhile release from Sachiko M. and Toshimaru Nakamura, "do". Reading this after having listened to "Animal Expert" several times, this struck me as unexpected but, upon subsequent listens, yes, you can pick that up and the entire case is much more complex that I'd thought on first blush. He also makes the point, no doubt echoed by many a young composer, that he doesn't simply want to "replicat[e] the music of others", no matter how admired they are.

In fact, in the first of the three pieces, "Vanity Arc", one can hear, or imagine, the lingering traces of music like that found in "do". As in all three pieces, things shift pretty markedly but there's a bit more quiet here, soft hums (punctuated by the fantastic, sharp sound of a small piece of dropping metal, near the beginning), muted rustles of urbanity, etc. Here, the overall level of cal, icy intensity is held throughout, the hums developing dark resonances, wet footsteps in gravel wandering across screen and other, less decipherable sounds (including a recurrence of the metal drop, somewhat fainter now) contributing to the drama. The second track, "Mammoth Husbandry", gets off to a rockier start for me, with sounds of street level violence, shouts and gunshots that are a little too clichéd, reminding me of an unfortunate Erik M piece I witnessed here last year. It only lasts briefly but opens the doors to sets of elements that have more in common with much that one hears from the INA GRM axis, sounds that, for me, come uncomfortably near some kind of aural boundary, for example whistling, cold, metallic rushes offset but foreground crackling and (maybe) guttural speech. These are admittedly personal reactions, but such moments have an over-processed feel for me. Now, when re-listening, I realized they didn't occupy nearly as much time as I first thought, they simply stood out a bit, shadowing sections that are much more in line with the tension established in "Vanity Arc". As enjoyable as those portions are, it makes the whole that much more disjunctive and difficult (for me) to balance. There's so much going on, so disparate, with the occasional distracting elements (as above, also fireworks, choirs, classical samples, etc.). Of course, this may be Strickland's entire goal and if so, it's strikingly achieved--the entire disc sounds excellent (mastered by the indefatigable Joe Panzner). So I find myself fluctuating between periods of rather extreme enjoyment and less extreme irritation. Maybe a good thing? My opinion might well continue to alter, maybe the forms and structures will cohere more understandably over time (listening at this moment, midway through the last cut, "Vaguely Human", much of it sounds pretty spectacular). In the meantime, I'd easily recommend this to any acousmatic fans--it's as good or better than anything I've heard in the field in recent years. (Beautiful sleeve designs, I should add).