Two new releases from Insub, part of their ongoing series of downloadable material accompanied by physical cases and inserts. 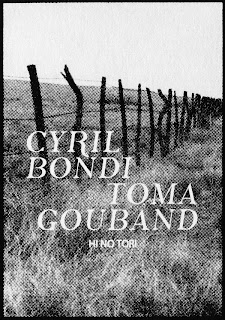 A very fine, infinitely subtle percussion duo with Bondi on floor tom, loudspeaker and small objects and Gouband wielding stones and other percussion.

Very difficult to do justice to the music in words--the pair present a single, 42-minute piece, improvised, with a multitude of rhythmic elements and tactile approaches but while the rhythms are almost always present, "rhythm" isn't the first thing one hears. And while the range of attacks is immense, there's no annoying grab bag feeling of trying this, then that, so common in this area. The music is entirely successful as a whole; it's only when the listener chooses to attend to the individual elements that they are foregrounded. Those elements include objects rolled in metal pans, soft alarm bell-like sounds, hollow taps galore, dry rustles and knocks, deep (but quiet) rubbed thrums, countless others. A given element tends to employ repetition, sometimes quick, perhaps more often slow, leading to that implied rhythmic feel. There are pauses between sections, the pair turning to other options, but they somehow feel quite natural, a connected chapter rather than simply another item on the checklist. The music maintains a sober, steady presence throughout, an overall common feeling with tons of varying detail beneath--that old Feldman reference to Turkish carpets came into my head more than once. The recent Diatribes recording with Bondi and D'Incise (who mastered this session) is one of my early favorites of 2015--this is another. 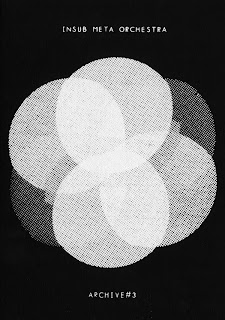 An ambitious project involving some 29 musicians for this recording, mostly Swiss and only several of whom I've heard prior (D'Incise, Cyril Bondi, Sébastien Branche, Rodolphe Loubatière, Christoph Schiller and Bertrand Gauguet, perhaps others). As D'Incise and Bondi make clear in their conversation, which is enclosed with the packet, one of the obvious problems with such a large ensemble is overplaying, a potential snag the group avoids entirely. Each of the four pieces has clear parameters and none of these involve overt individual contributions. "4GS", the shortest piece, is also the most varied with low, rubbery rumbles and scratches played against thin, high, keening sounds, very visceral and solid. This is followed by two 15-minute works (no composing credit is shared here but from the discussion, I'm getting it was a largely cooperative effort): "SLC", a kind of respiratory piece, the orchestra emerging for breath periodically, taking in some air in the form of rustles, low rubbing and other subtle, abstract noises, then lapsing into silence, repeated throughout, growing slightly more insistent toward the end, while "UNC is a study in soft, overlapping long tones, almost drones, gradually plunging in amplitude--both are lovely. "MNC" is, oddly, the most challenging work here, almost 50 minutes of one thing, though a complex thing. I'm reminded a bit of Feldman's "For Samuel Beckett" in the sense of its monolithic aspect, a blurred mass, kind of like a ball of string, impossible to dissect but very present, seething and shifting. Hard to say exactly how the sounds are being produced--the effect is staticky but I imagine it's from rubbing objects with soft items00but no matter. I find it very engrossing and immersive to listen to and can imagine doing so in a live situation but many will doubtless find it a tough, almost featureless go, like staring at a white noise TV screen for 50 minutes. I love that they stick to it for such a length, attempting, and arguably succeeding in creating an alternate frame of reference by dint of perseverance. Well worth hearing.