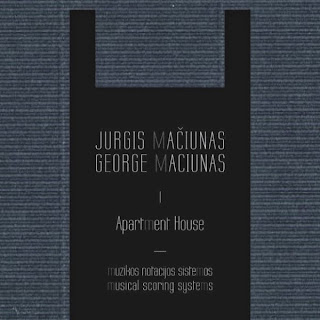 It requires a certain amount of boldness to release an audio recording of several pieces by Maciunas, given their at least partial theatric nature; you're inevitably losing something in the bargain. But the Apartment House ensemble, under the direction of cellist Anton Lukoszevieze, manages to pull things off quite ably, enjoyably and mischievously.

In a sense, the first seven pieces, all written in 1962, progress roughly from the ridiculous to the (popular) sublime, though Maciunas undoubtably conflated the two notions. "In Memoriam to Adriano Olivetti (version for ensemble)" (a member of the typewriter family but better known for initiating progressive workers rights platforms in Italy) consists of instrumental passages of a simple but "musical" nature--bowed string chords, for instance--interspersed with clatter from struck objects and vocal intonations, largely of the word, "no" along with flatulent buzzes (which will return later), burps, whistles and more, a welter of sound but managing to be heard as spatially separate, occupying discrete places in space. In this way, Apartment House, on this track and others, compensates for the lack of visual stimuli about as well as possible. "Solo for Rich Man", performed by Lukoszevieze, is marvelous, the performer shuffling bills and coins in his hands before dropping the latter to the floor, ripping the paper money, etc. Here's the score: 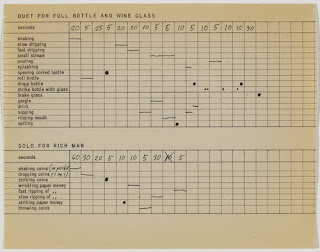 It works extraordinarily well both as a sonic document and, more, in the listener's mind's eye, visualizing the event and, of course, contemplating it. "Piece for 3 Mouths (homage to Toshi Ichiyanagi)", performed here by Thomas, Ruffer and Sparling, is probably the hardest one to "get past", considering the range of extreme, cartoonish and, one might say, adolescent sounds involved. Fart noises, loud, soft and wet, mastications, labial flutterings of various sorts, whistles, kisses, clucks, strangulated gargles, you name it. Perhaps more than the other works included here, you need to consider its time (1962) and the rather more provocative effect it would have had then than now. Which is an argument, of course, as to how deep and strong the piece is, at heart and, for me, it's the one cut here that has suffered in the intervening years. "Solo for Balloon (for Jean Pierre Wilhelm)" could have met with a similar fate, I imagine, but as rendered here by Lukoszevieze, the sighs, wheezes and, yes, flatulent sounds cohere quite well into a rubbery universe. Again, the score, though simple, is somehow fascinating:

Even having heard some of the underlying string playing in the Olivetti piece, the version for string quartet is surprising and surprisingly beautiful. I can't locate an image of the score big enough for me to read but we hear the quartet bowing very intense chords, some with microtones, others with rough burrs, sometimes with one member pizzicato, a tense back and forth sawing, partially drone-ish but always broken apart or disrupted one way or the other. An exhausting, pretty spectacular work. "Homage to Philip Corner, version for clarinet, cello and piano", as with the first Olivetti piece, contrasts quiet, pensive playing (very lovely) with rude noises (again, sphincterish) though the latter are more accents here, as though saying, "Sorry, you're not allowed something this pretty quite so easily; it comes at a price." Strong work. A somewhat similar idea lies behind "Solo for Violin (for Sylvano Bussotti)", here performed by Mackey. A lucid, resonant melodic line (the score says, "play any sentimental tune") is periodically and severely interrupted by banging, blowing, spitting, metal-dropping or other sounds, often for quite a while. I admit that I ached to watch this, but the track is great on its own.

"Music for Everyman" (1961) is much more of a challenge in the sense of both its duration and the relative lack of single or dual focus as heard in the prior compositions. I wasn't able to locate a score but I understand it's a grid system, much like those used by Cage and various Wandelweiser-associated composers, wherein the musicians perform given actions somewhere within a specified time frame, allowing some magnitude of "freedom" balanced by a relatively light control system. As with the first ensemble piece, there's a very welcome feeling of space here, an entirely non-cloying sensibility which would have been disastrous. As is, given the extremely varied nature of the sounds (musical or almost so, shouts, rattles, whistles--an enormous closetful of noises delved into with childlike glee--, my tendency is to sit back and just immerse myself, not seek anything in particular, act as though I happen to be dwelling in some public place where this clamor is occurring. It works perfectly well then, in this case I'm guessing much more so than it would if encountered at a "concert", my attention focussed on a stage. There, I imagine I'd be more impatient. Even here, part of me would have liked to have heard the intrusion of exterior sound but really, it's pretty fine as recorded. The ideas may have sprung to life more than 50 years ago but on the whole, they still resonate and then some.

A wonderful, challenging and even revelatory release. It includes excellent essays by Lukoszevieze and Žilvias Andriušis. By all means, search this one out.

e-mail them at: info@mic.lt