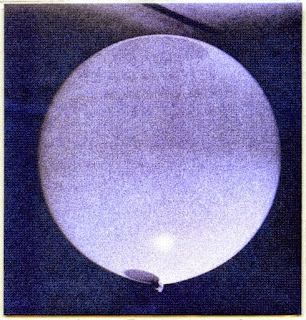 Capece continues to unveil one exciting, probing work after another.

There's not much information provided and, despite the cover image, no balloons are listed though perhaps some are employed to dislocate one or more of "analog synthesisers, oscillators, ring modulator, equalisers in feedback, hand fan, sine waves, electronic drum". Regardless and leaving aside my perennial quibble about necessarily missing a portion of the corporeality of Capece's music when listening on disc, the two sections of "Epoché" are fantastic, ear-bending experiences.

Part 1 begins with a roar, like the center of a storm. Glimmers of sine waves poke through the darkness, are swallowed in the intensifying winds. Several minutes in, things subside to a vibrant, shimmering hum that becomes more complex the deeper you listen, splaying out into liquid pulses. (My current speaker set-up is head-high while seated, at opposite ends of my work table, allowing me, when desired, to lean forward and place my ears right between them, something I did often while listening to "Epoché" deriving much sensory pleasure, especially in parts like this). The pulses carom around one's cranium for a good while until the clear tones sputter out, hissing as flames are quenched and matters become increasingly chaotic and ear-scouringly abrasive even though a fairly low volume level is assumed for a good bit. Harsh whistles, long, sandy scrapes, intense sines, rough buzzes--all mix and shift, something always burrowing through but also routinely changing character, reaming one's earhole until the track's sudden cessation.

Part 2 begins more soothingly, with a rich, full sine-y drone, the wavering within its own substance supplemented by that conjured forth from the movement of the listener's head. There's a just-discrenable rattle in there too; hard to say if it's on the disc or part of the room you're in. A dark, throbbing buzz infiltrates, accompanied by, maybe, the same rattle, amplified, both finally eliminating the initial drone, establishing their own sinuous, somewhat sinister space. Again, things spiral into wider realms, though always retaining strong centrifugal force and forward propulsion. Beeping signals traverse the seethe; one has the clear impression of warning lights, reflected off the dull, rotating mass. It all collapses into a lovely pure tone, lasting only ten or so seconds.

A very impressive work and a fine addition to Capece's singularly strong canon.