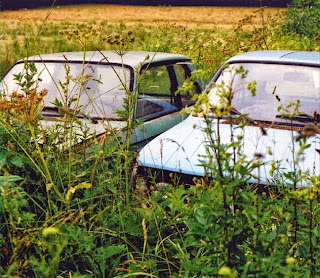 (caveat: I was included in the "thanks" for this album, but that was only for doing a small part to facilitate La Casa's trip to Japan for the recording)

So difficult to think of things to say about this release short of simple descriptives. Less "field" than "situational" recordings, I think, some difference there though hard to pinpoint. You might start with the fact that there are fifteen tracks, rather unusual in this neck of the woods, leading one down a snapshot analogy path, which might not be all that far from the deal. But the three main photos on the sleeve, by Éric Coisel, featuring abandoned car hulks in various states of takeover by plants and animals (recalling very much the paintings of John Salt) and a bicycle in the beginning stage of blanketing by beach sand, argue for a more overtly meaning-laden reading. At the same time, the one in the CD tray of a golfer strolling atop a green is almost a cipher, hardly even a snapshot.

I wrote the above then had some communication from La Casa, filling me in somewhat on what actually occurred, saving me the embarrassment of many a wrong guess. In a nutshell, some of the sound sources are from machines with additional controls designed by Unami, more or less household devices but programmed to generate sound in various patterns, many of them rhythm-oriented. These are combined with "naturally occurring" machines in their own habitats as well as human activity sounds, both of which were processed by Unami and La Casa into sequences, again with a kind of rhythm at their core, though not always an obvious one. All this goes to develop some kind of an understand of machine/human relationships. This description may not be entirely accurate but it's much closer than my ears alone would have gotten me.

I'd been confounded early on as to where the balance lay between existing machine sounds and those initiated by the duo. Clearly, things were being turned off and on (the sharp ka-chunks of the switches sometimes prominent), relatively small engines, like those for vacuum cleaners or washing machines, revving up and dying down, the listener hearing both the whir of the engines and, often, affiliated clicks and knocks. Too, these were set within larger spaces so that, as on the first track, you hear cars, birds, etc. You have the impression of a language being spoken though the grammar is alien and obscure. You also get a sense of struggle on the part of the equipment, a constant striving, failing, striving again, failing again. It's rarely aggressive, although the opening rat-a-tat of the second cut will grab your attention as will the buzz-saws on the penultimate track. More often, knowing what I know now, I have the image of larger, modified, somewhat misshapen Roombas trying desperately to interact with their creators. Humans answer back to an extent, in (what I read as) processed kendo classes (plus one with balls of some kind), the wooden taps of a knife slicing vegetables, door hinges squeaking. Track six contains what seems to be spliced switch sounds of varying origin, sequenced in a kind of rhythm that's not really apparent until you squint your ears looking at it, very fascinating, set against an open background with muffled voices and traffic. I'm confident I'm missing a ton here and will peel back layers over time and repeated listens. It's less about aural pleasure, I think, than ideas though once in a while, both combine beautifully. My personal favorite is Track 13, comprised of a mysterious, soft swishing sound that I sometimes hear as a paintbrush scouring a small wooden box though it may well consist of hyper-thin slices of sounds from totally unrelated incidents, rapidly sequenced--a fantastic few minutes, in any case.

"Parazoan Mapping" is quite unique, unlike anything you're likely to encounter elsewhere. Perhaps willfully obscure, you nonetheless have the impression of a huge amount of thought having gone into its production, any obscurity being a necessary byproduct. Bold work, something to return to often, I think. Mandatory listening.