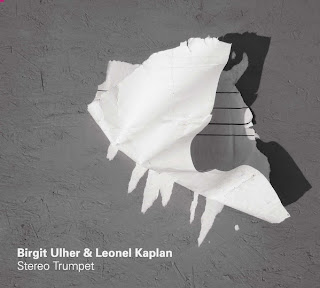 As the title implies a trumpet duo, with Ulher adding radio, speaker and objects, the stereo image reinforced by three of the four track titles which have palindromic aspects.

Within eai over the past twenty years, it's fair to say that brass instruments, generally speaking, have fared better than their reedier cousins. I've always thought it has something to do with how they're easier to depersonalize, to remove the "human cry" that's such a deeply etched part of reeds, particularly the saxophone. I don't mean "depersonalize" in a negative way, of course, more as a means to remove as much ego or gestural identity as possible, something that seems to fit more readily in what became (again, generalizing), the eai aesthetic.

Part of me desires to hear something of a pendulum swing back toward pure tones, at least on occasion. Axel Dörner will dip in once in a while and, on the Wandelweiser front, everyone from Malfatti to Craig Shepard to Robin Hayward and more will routinely play "normally" as far as tone generation goes, anyway. But, as clearly evinced by this recording, there's also still ample room for discovery and (perhaps more importantly) just well-conceived, good music among the breathier, more percussive and abstract reaches of the brass family. The opener, "Otto sees Anna", has a fine dialogic quality, breath tones from one (Kaplan, I believe), percussive rattles in response from the other, intense and earnest, opinions offered seriously but not stridently. There are extended periods of pebbly granularity, the pair creating complex textures that, when overlaid, become very dense and fascinating plus periods of active quiet, the burbling subsiding but always there, always restive. The language is no longer new and I admit, this is a piece (running over 16 minutes) where I might have liked to have been pleasantly surprised by some tonal content, but it's very well-structured, the pace maintained with ease, the warmth of the conversation evident--no complaints at all, really, a fine work. "I Did. Did I" is a concise exposition of whispers and oddly liquid sounds while "Late Metal" meanders more, agitated playing lapsing into silence, popping up at a different location entirely--bumpy, unpredictable and tough, featuring some quite harsh metal scraping at the end. The title track strikes me as the most fully realized piece here, somehow having a greater sense of depth and scope and possessing a very organic feel, of something growing and evolving. There are hums amidst the growls, sharp breath intakes and a rotational sense that works wonderfully.

A fine, imaginative release, even if they never get around to recontextualizing those old attacks... :-) 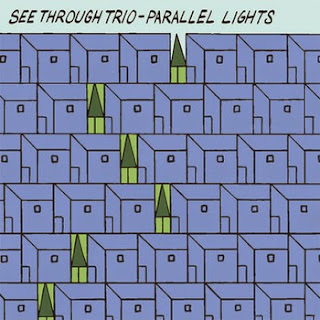 A Toronto-based jazz trio with all nine compositions penned by Johnston, who has worked with Anthony Braxton among others and who cites Ornette, Carla Bley and British psychedelic folk as influences. They Bley is detectable more than the others, I think, especially her earlier, pre-EOTH work, with a little Giuffre thrown in and something of early, loping Sun Ra songs. The playing is very concise, really excellent all-around (Ng stands out for me), centered around post-boppy melodic lines, often begun and continued in unison, tending toward the bouncy. It's less about soloing than group playing, which is refreshing, each piece having something of a jewel-like quality to it, finely polished. This is, I guess necessarily, at the expense of some more ragged creativity and openness (which I desired on occasion), but what Johnston and crew set out to achieve, they do so quite well. The tracks flow, the lines often shifting unexpectedly and often entering non-obvious areas and, as said, the playing is uniformly excellent. Johnston has a warm, deep tone that recalls Holland, Gill a very rich, slightly pointillist style, its spikiness supported by a strong, underlying lyrical sensibility (would like to hear what she does on her own) and Ng is just stellar throughout, really strong and assured, always inventive; again I think of Giuffre, but rougher-edged, fuller or maybe a better version of Garbarek in his youth. As with Gill, I'm curious about her own work. Quibbling, the pieces have a bit of self-sameness to them and I would have liked to hear more variety therein, certainly some sparer approaches ("Guided by Wires" and the concluding "Inside Chance" almost get there) with more room for free improvisation though perhaps, at least this time out, that's not what the group was up to.

As is, as enjoyable a contemporary jazz trio album as you're likely to find, committed, original and very well realized.

Dip in for yourself at their Bandcamp site