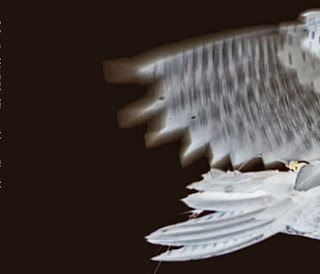 Very odd fluctuations in listening experience with this album over the last few weeks. Initially, I was absolutely entranced by the pure sonic richness and dark beauty of the music, the wonderful, if logically difficult to grasp, integration of the piano and field recordings. More and more, however, I found myself being captured by the sheer strangeness of it, a kind of eerie otherness, the shifting of realities that, for me, had very much to do with (faulty) memory. I've since gone back and forth between those poles with this very moving and disturbing work.

There's a lot of symmetry in play here, beginning with the pair of reflected cover images, front and back. As has been seen before in his collaborations with Jason Lescalleet, Lambkin enjoys playing around with track durations for various, often oblique, purposes. Here the five tracks last 4:30, 17:17, 5:26, 17:17 and 4:30; It wouldn't surprise me if the lengths themselves held some significance. Tracks 1 and 5 are essentially solo piano (one can discern a good amount of ambient sound) while tracks 2 and 4 are largely field recordings and other manipulations, the second ("Aufflattern die Fledermäuse") ending with several minutes of piano, the fourth ("Zebrochene Münder") both beginning and ending with same, throwing in a needed asymmetrical touch. The central piece, "Ein eiseger Wind", exists in a separate space, dreamy and drony. The titles are image-extensions from ideas in poems by Albert Giraud which were used as texts for Schoenberg's "Pierrot Lunaire" (The album title is an exact extraction from one). Reading up a bit on it, I learned that Schoenberg was somewhat obsessed with numerology so perhaps the track durations are a nod in that direction. Musically (having refreshed my memory by watching a performance on video) I can't hear much of a connection but maybe it's in there, beyond my ability to parse out.

In fact, probably led on by the German title and track names, my initial correlation was to Schumann and German lieder. Not that I am at all well-versed in the area (I'm not!) but the dark, even mordant Romanticism (like a painting by Böcklin) had me half-expecting to hear Dietrich Fischer-Dieskau well up from the depths. "Leuchtfeuer" ("Beacon") opens with six pairs of extremely low piano chords, each held 9-10 seconds, quite funebral, only gradually working its way to a less murky light, though an inky undercurrent remains, and the nether reaches, quavering, are reached again now and then. You can hear odd sounds in the background, kind of wood on wood slaps and, at one point what sounds like a faucet turned on and off. This is jarring in and of itself, not allowing the listener to dwell simply in the apparent drama but opening a wider door into the surrounding world, one seemingly unaffected by the sense of heaviness and loss, very workaday, including the final sound, metal tossed on wood. The transition from this umbral dream-state is brought almost horrifically to the fore with the incredibly annoying sound of a cellphone on buzz, an element that has the added benefit of causing household consternation if played at sufficient volume. I've assumed, not that it matters, that it's been Pisaro on piano and Lambkin on residual sounds, which come into their own on the second cut. I did momentarily have the mischievous thought that they might have surreptitiously switched roles for this release but...naah. The cell buzzes twelve times (well, twelve and a quarter), maybe echoing those initial pairs of piano chords? A harsher version of the clatter that ended the first track leads to some sampled wooden flute that I swear I've heard before (a shakuhachi recording? Don Cherry?) and things then tumble headlong into a dense mass of overlaid tape sounds; I thought one sounded like an unholy grafting of a baby's babble and a cat in heat before I realized it must come from one of those "cats saying no" videos--that, arguably, makes it worse. Low, Tuvan drones, through which the piano appears like a wraith, pensive single notes that morph into electric piano variations on the same, with helicopter-y flutter. Beautiful, creepy.

"Ein eisiger Wind" ("An Icy Wind") both lives up to its title and stands apart, a kind of nodal point at the end of an ellipse, all soft, electric drones, light and sandy to thrumming, low and dull, with periodic washes of possible shore waves. The painfully titled "Zebrochene Münder" ("Broken Mouths") starts with piano, slow, hands near the upper and lower extremes, agitated but perhaps stuck in dream-motion, unable to move quickly. The music moves back to the real world, so to speak, shuffling sounds, general hum, Lambkin's voice, distorted, birds and beeps, everything displaced, blurred/sharp. Are those flamenco castanets? But no, they falter into just "taps", confusing. It's a truly amazing sound world created here, moving with rapidity from one element to another (or, rather, several elements, to several others) but seamlessly, with dream-logic firmly in place. When you hear frolickers at a park or the beach, you also get subterranean bellows from some behemoth threatening to arise from beneath; those black butterflies clearly portend death. The piano, more processional now, almost stately in its dirge, reappears, leading directly to the closing "Unkönig", back down into darkness, though dappled with patches of light. Such deep, lovely chords here, so sad and true, offering momentary resolution before the inevitable downward trek.

shame about the overly compressed piano. otherwise interesting. chris b.