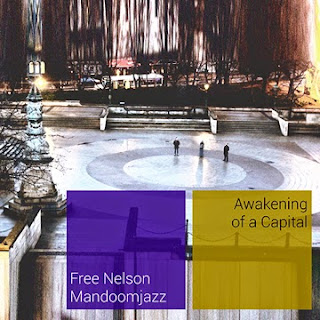 OK, I don't get the name either, except that this trio calls what they do "doom jazz", ostensibly combining aspects of doom metal and jazz. What Mandela has to do with it, search me; it's not like I hear kwela influences. But get past that and there's some interesting stuff here, more on the jazz side of things.

The group consists of Rebecca Sneddon on saxophone (alto, pretty much, I think), Colin Stewart on bass and Paul Archibald on drums. The first reference I found myself making was to mid 70s post-Ayler groups like those of Charles Tyler or, to an extent, later, groove-driven ensembles like Ed Wilkinson's 8 Bold Souls. Though on the first cut, the finely titled, "Sunn Ra)))", the sax squall and growling, ominous bass had "Painkiller" written all over it. But then, once the piece's bass line kicked in, it settled into what would be the general mood for much of the album's music: a slowly loping substructure, very sinuous and juicy, the saxophone playing in unison at first then embellishing above. I can see the relationship between those bass patterns, especially when hyper-drenched in fuzz, which occurs fairly often, and early metal like Sabbath (perhaps later as well-I'm simply not very conversant in the genre) but they could just as easily have been derived from, say, Soft Machine. It's an engaging mix, though, with Archibald's drums solid and not rock-boring and Sneddon's very capable reed work; to differentiate form the Painkiller reference, she's probably a stronger player than Zorn. There is the odd quickening of tempo accompanied by sharp, on-the-nose playing, but most of the music, true to its source, wallows in the slow, muddy waters, and wallows well. Those low, bass melodies are routinely engaging ("The Pillars of Dagon", notably), each of the eight pieces carving out a darkly groove-filled niche. Would I liked to have heard a wider variety of approach? Sure, the attacks pall a bit after a while but who knows how a freer, more expansive mode would work? It might not at all, but I'd have liked to have heard the attempt. The Lovecraft-inspired "Erich Zann" shifts gears somewhat, generating a quasi-string section backing (sampling? not sure how) and including some fine, abstract string scratching as counterweight; I'd be curious to hear more along this path.

Like the See Through Trio I wrote about a couple of days ago (though rather different in outcome), this isn't in my normal ambit but I found the music pretty absorbing and exceedingly well-realized and can highly recommend it to more jazz-inclined readers.