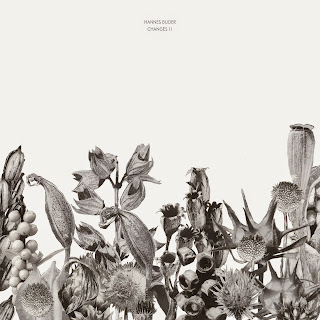 The PR flyer that came with this release, written by Hannes Lingens (with whom Buder recorded a fine album, "[ro]" last ear, also on Umlaut), cites the solo guitar recordings of John Fahey, Fred Frith, Derek Bailey and Loren Connors--serious stuff. One can certainly hear references to these players though, happily, Buder carves his own approach and it's quite an enjoyable one.

As with, arguably, those gentleman, beneath the (in Buder's case) occasional avant trappings, there lurks a much more traditional player, one with a fine sense of melody and deep harmonies, all a very good thing. Ten tracks here, six original, four from the German folk tradition, Buder playing pump organ and wooden flute in addition to archtop guitar (which I'm informed is a "steel-stringed acoustic or semi-acoustic guitar). The very beginning ("changes II (for eugen drewermann)") is very much in Bailey territory but Buder quickly moves to more Frith-like tonality, with some lovely, deep, resonant strumming (very much his essential sound), with hazy pump organ beneath, traveling form abstraction to serene calm. The traditionals are quite winning, starting with "ich hab de nacht geträumet", bowed guitar sections framing a delightful, romantic reading of the song and "heidenröstein", an even prettier song, its thoughtful, pastoral theme adorned by a smattering of high plinks and low plunks. Two of the tracks, "ocean #1" and "ocean #2" are for pump organ alone, very strong, broad, steady-state works, richly layered and surging. Occasionally, as in "improvisation #4", Buder comes perilously close to a kind of Frithian pyrotechnics but pretty much manages to skirt the temptation and wheel things back into a more considered pathway. When the disc closes with the folk song, "es flog ein kleins waldvögelein", alternating between the straight and the Baileyesque, I was by and large won over, though I'd still like to hear Buder concentrate on some of the sounds created in the quieter, more contemplative passages here. Well worth checking out, especially for fans of the above named guitarists. 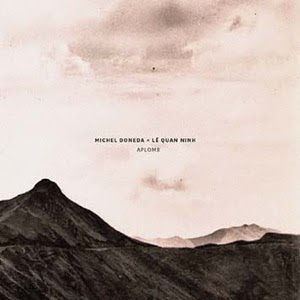 I saw this duo at the Église St. Merri here in Paris right around the time of this recording. It was a disappointing event, many missed opportunities for more considered playing amidst one flurry after another of what I heard as incessant activity in place of necessary sounds. Both musicians (Doneda here on soprano and sopranino saxophones, Ninh on his horizontal bass drum with objects) are obviously extremely adept at what they do but both also tend toward a hyperactive state that forces the listener, for every beautiful pool discovered, to wade through a great deal of underbrush. But that's too simple, surely, and the searching can be heard in its own right. It's just...well, a subjective difference, I suppose, between "searching" and "thrashing about". They aren't always loud, far from it. It's just that the choices made seem staid, obvious, even--I hesitate to say it--clichéd. It's not all so bleak; they rein things in nicely on "Halo d'Apparences", with Ninh employing softly struck bowls or chimes, Doneda keeping to a fine, narrow spectrum, the pair allowing the surrounding space to filter into and between their sounds. It reminds me of a similar portion during their concert where both left the performing area, playing very quietly, slowly walked to an apse in the rear where they were unseen to the audience. It would have been a perfect way to end a set, but...they returned. Happens here too. Not to my taste then, but at St. Merri, the crowd loved their performance and I've no doubt that fans of Doneda's and Ninh's previous work will find much to enjoy here.