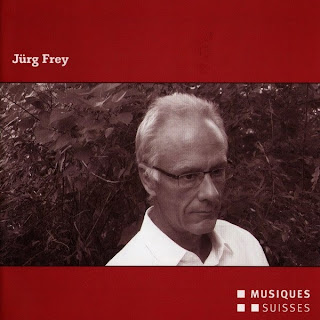 This release came out in 2014 but I only recently heard of it and, perhaps due to its apparently limited distribution, I suspect that's the case for many. And that's a shame because it's so, so great.

"Memoire, horizon" (2013/2014) is for saxophone quartet and lasts about 30 minutes. It begins with long, floating notes, the quartet acting like an extended chord, the pulses quavering both in the individual sound of the reeds as well as in the massed effect. As is so often the case in his works, the tonalities Frey chooses are not so unusual--in fact, they're usually very warm and familiar--but their placement, dynamic, depth and more are so precisely and perfectly done as to render the music consistently new and surprising. It's very strange. There are also at least two other sounds in effect, both of which enhance this performance to a huge degree. One is a low, faint rumble that sounds to me like some element in the room, perhaps a large, stretched canvas on the wall, is vibrating in reaction to the sounds (absurd, I realize, but that's the impression I have). The other is a high, rustling sound, I think coming from the air pressure on the reeds themselves. As is heard later on in the clearly audible sounds of the piano pedals, these contribute greatly to the realness of the space, things that are normally edited out but happily, through design or chance, left in the mix here. The entire space becomes so much more alive and bristling. Those long notes very slowly peel off from each other, settling into a dreamy kind of chorale, maybe even with a nod toward Renaissance voicings. The baritone assumes a melancholic lead, the higher horns acting as a chorus behind, very moving. The horns coalesce into discreet, three-second, cloudy chords with a short silence between, almost processional, eventually arriving at a two-chord, calm back and forth...there's so much going on here, the transitions so hard to pin down but both feeling so right and, as said, often so moving. A wonderful, absorbing and thought-provoking work, possibly my favorite saxophone quartet ever.

The seven pieces that comprise "Extended Circular Music" have a rough symmetry to them, the first and sixth (nos. 1 & 7) by the Mondrian Ensemble and Konus Quartett respectively, the second and fifth (nos. 2 & 3) for piano and piano/viola and the third and fourth (nos. 5 & 6) for saxophone trios. The music is slow, contemplative, tinged with longing and simply gorgeous. The first, for piano quartet, begins with sets of four steady chords, undulating in something like a dirge but not so dark. Frey often establishes what you think is going to be a pattern throughout, and a very beguiling one, only to alter it subtly, extending a chord or silence now and then, just enough to keep things in the real, mutable world. Again, one hears the room, including, I think, the intakes of breath on the part of the performers--I love that. The second, for solo piano (the pedals heard) continues in the vein of the first, but takes alternate pathways, becoming even more somber but with such luminous chords shining along the dark trail. The slowness, like an extreme reluctance to set down one's foot, is entrancing. The pair of saxophone pieces (the first for three altos, the second for two altos and baritone) again harken to older music; I still hear a kind of Renaissance horn feeling, though I could be entirely wrong. Strong four-note melodies are stated in the first only to dissolve into a swirl of tones, re-emerge, evanesce once more while the second features slower pulses, varying in duration, richly shaded in tonality, with a breathing, sighing aspect, plangent. No. 3 stands out somewhat from the rest, an almost wistful, dancelike piano figure, the pedals acting as soft percussion, that turns extremely dark and mournful, the viola grainily emphasizing this umbral current. One might be tempted to hear allusions to Satie or Skempton, though I'm guessing that's coincidental. In passing, I'll say that more than once I thought of this music as being similar to what I imagine Gavin Bryars might have achieved had he not taken that tragic ECM-induced turn in the 80s; there's a sad grandeur here that Bryars touched on now and then. The final portion of the suite, for saxophone quartet, is a bit more diffuse, extended over 10 minutes (the other pieces are between three and five) and allowed to ruminate more widely, to expand occasionally into "sourer" tonal ranges, to meander, if you will. The composition is both excellent in itself and serves as an at least partial contrast to its companions, perhaps pointing a way further along in this series (I know a No. 8 is to appear on a forthcoming Another Timbre release).

"Architektur der Empfindungen" (2011/2012), for piano quartet, concludes the disc. Architecture of sensations. It's probably the most challenging piece here in terms of flow (varied) and consonance (in and out). There's a good 20-minute documentary on Frey available on YouTube in which he speaks a bit about his compositional approach which generally involves fragments, small kernels of ideas that may or may not find their way into a work, appearing at various points within. I had somewhat the impression of Feldman's classic analogy with Turkish carpets, taking them a weave at a time, placing a given sound with regard mostly to its immediate neighbors yet somehow generating a structural whole. Maybe Frey takes this and, instead of applying it to individual notes, uses it on ensemble passages. In any case, the logic of "Architektur der Empfindungen" is elusive yet very attractive, very mysterious (like sensations). There are points of semi-minimalist, propulsive motions, more of drawn-out, slightly astringent string lines punctuated by bright, high piano notes (and a wooly background hum!) but also, in keeping with the character of the disc as a whole, that probing elegiac quality, balancing deep appreciation of the beauty of things with knowledge of their inevitable disintegration.

Great writeup, Brian, this has been a favorite of mine lately, as well, maybe the best thing I've heard from Frey.

Thanks for this. I have only just discovered this composer and your write up was very helpful in starting to understand his work. Its great that this disc is on spotify.