Very late to the party, I'm afraid, and I believe both items are currently out of stock but just in case.... 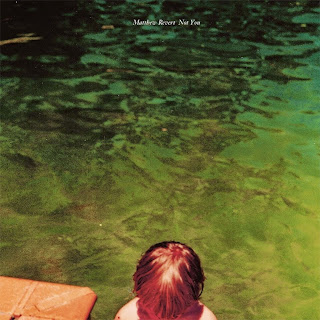 Matthew Revert - Not You (Kye)

Ten engagingly low-fi selections on this LP, narrated by Revert over acoustic guitar that ranges from post-Bailey to Fahey-friendly, voice and guitar navigating through a mesh of various noise, some apparently electronics-induced others sounding more like a bit of mic jostling. I think even if it hadn't appeared on his label, I'd have thought of Lambkin as a reference point though Revert is a bit more intense in a way, relaxed but not as much as Lambkin (or as much as he seems to be). These tracks play out almost like poetry readings (often involving repetition), Revert's voice sometimes right on the mic, blurring comprehension, or filmic cut-ups of same, amidst shredded and stained stock. For all the apparent casualness, I was struck by the recorded nature of the sound, particularly as filtered through the microphone, something unlikely to be heard sitting in the same room. For those who know Revert's very fine visual design work, there are also clear affinities between the "found" aspect of many of his book and album covers and the music here, the willingness to grab things within reach (but also to have cool things within that reach). The ten tracks, each between about three and five minutes, can pretty much be heard as a continuous flow, the main musical change being the guitar--there's a good amount of self-similarity in play here. But flow it does, in an engagingly bumpy way, tumbling slowly along, picking up the odd bit of detritus on the way. Good work, the first I've heard from Revert in this field; very curious to hear what follows. 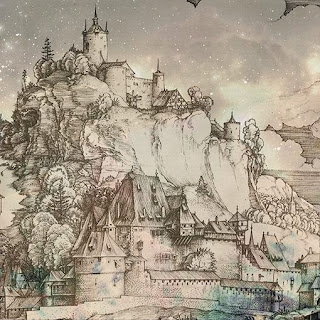 Nice detail from Dürer's "The Sea Monster" gracing the cover...

Food Court is an Australian trio, James Rushford, Joe Talia and Francis Plagne. I'm not sure what they play or how the album is constructed but one hears recorders, guitars, percussion and other instruments (more musicians are listed as contributing). They take as their source a rondeau by the 14th century French composer, Solage (sometimes Soulage) called, "Fumeux fume par fumée". The original is a lovely, very strange sounding vocal piece (at least on the recording I listened to on YouTube), with many unexpected harmonic elements that cause it to sound unusually modern. Here, in the first of two side-long, live performances, the trio and friends dissect the work a bit, carving it into fragments lasting 20-30, those portions played, as near as I can tell, in a purposefully "amateur" fashion, not quite á la The Portsmouth Sinfonia but akin, as though several better musicians (or, at least, more familiar with the instruments they're playing) were working with more obscure repertoire. Though I should say that, after listening to the original, it might well be the case that Food Court is taking those odd harmonies and extending them, rendering off-pitchedness a goal. At the end of the piece, they do settle into a reading that's pretty traditionally solid...almost. :-) Much fun, and really lovely to listen to. Side B is far more abstract, a set of eerie, high, long tones within whispers and the odd percussive tap or clink, throughout which a male voice repeats variations of "yeah, so (or "sell", I can't quite tell)", sort of like a binary sequence. The Solage eventually appears, more or less, in the form of a cloudy calliope kind of sound, wheezing and billowing delightfully for a few minutes, soon replaced by lightly intoned/moaned vocals. I enjoy Side A more but this has it merits as well, an intriguingly ascetic take on the original.

If you can find 'em, both recording well worth hearing.