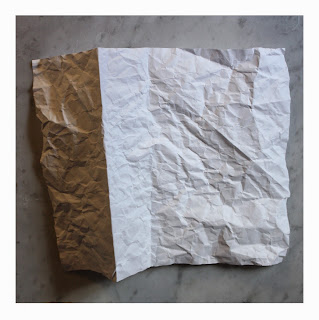 Somehow, I hesitate to call this drone music. The hum that extends throughout the first half-hour plus is hollow and pulsing, true, but it for the first few minutes, sounds as though it could falter at any moment, that its power source might be on the verge of collapse. You hear dull clanks, as if the centripetal force whatever's rotating periodically sends it off-center, its flanges colliding with the containment shell. In a while, though, it settles down into a slowly swirling, complex dance of creamy tones, super-enticing. It descends lower and lower, generating wonderful muffled, indistinct throbs, resurfaces in a slightly different guise, bearing somewhat sour quavers and then drops out entirely, leaving a higher, more distant, ringing tone in its wake, perhaps bowed bells, and roughly bowed at that, with accompanying grinding and banging sounds--excellent. Ok, ok, it's drone music, beautifully controlled and varied, fine overall arc. I think, apart from a piece on the "Trophy Tapes" compilation also on Glistening Examples, this is the first I've heard Meyers--based on this, I'd love to hear more. Proceeds form the sale of this music go toward supporting the White Page art gallery in Minneapolis, so what are you waiting for? 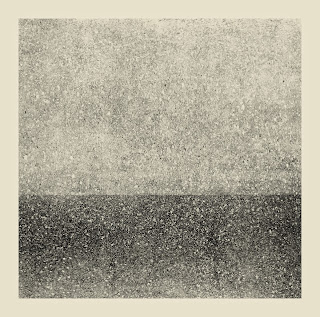 The first eight or nine minutes of this fine release also dwell in dronish territory. Zuydervelt (also known as Machinefabriek elsewhere) lists two saxophones among his arsenal which otherwise includes electric guitar, field recordings and other objects of an electronic nature and they're crucial to the success of this venture, imparting a warmth and, dare I say, humanity to the steady stream of (fantastic) detritus. Some low, crumbly sounds begin the piece and soon the reeds enter--long, soft, darkly timbred notes, throbbing somewhat. That first section is essentially a crescendo, multiple elements stirred into the mix, grimy and oily but with those saxophones providing hints of something beyond with some high, oboe-like, plaintive tones--it's a great, massively unfurling prelude. Just when you think it's going to carry on like this for the duration, it staggers, the horns popping and fluttering in space, the floor having dropped from beneath them. A great, disorienting change. The music grinds on, splaying out into a huge variety of buzzes, hums, rattles and who knows what else, those horns (I think? hard to tell sometimes) placating the horde a bit, drawing things gradually down for a while before welling upward once again in a static-strewn beehive of sound. Gentle horns over a deep, organ-like bed and ending with a lone sax wending its way through a marshy field of static or, I suppose, a snowstorm, lost. Excellent recording through and through, check it out. 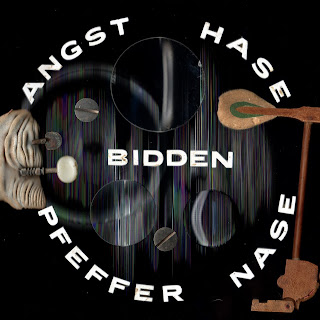 I may not be the best person to evaluate this one I've never, to the best of my recollection, heard Angst Hase Pfeffer Nase (otherwise known as Chris Cooper) and much of the work, at least as represented here, lies sufficiently in a certain bracket of noise music that's not my cuppa. But not all of it. This is a compilation--seven tracks, all but the last previously issued, ranging in recording date from 1996 to 2009. In fact, the first four are from 1996-1999 which the final three arise from 2007-2009 and, again if this is representative, I greatly prefer his more recent output. The earlier tracks are the kind of kitchen sink improv that, for me, fail to cross the line from haphazard (uninteresting) to random (interesting). There's a forcedness, a bit of look-at-me dexterity in jostling disparate elements (tapes seem prominent, digitalized and processed) and achieving a collage-like effect that doesn't strike home for me. It's music I hear as only a sidestep away from people like Raaijmakers but, for me, a crucial one. Clearly, there's a whole cadre of listeners who will disagree but so it goes. But then, with "Reveille and Commiseration" form 2007 (remixed in 2014) things shift considerably, beginning with the wryly and warpedly jaunty tune that opens the track and on to the layered saxophonics and mewling spread over various blippage. Now, I'm not entirely crazy about this piece, but it's an intriguing step. Following the brief but intriguing trough and tumble of "Cpl Rhomboid Tantalizing" (2008), with its shortwave and splatter, we arrive at the concluding track, "Feldweg" (2009) which exists apart, in a very different and, to these ears, more fascinating sound world. Not just that the tones are more rounded and softer--though they are--, but more for the lack of claustrophobic activity, the considered expansiveness. Small noises sounding in a large, watery space, active and slightly propulsive, but unforced. Yes, the wave sounds that infiltrate might be a bit over the top and perhaps its more the juxtaposition of this track versus most of the others, but I found 20 or so minutes of enjoyment here. I get the sense that long-term fans of Cooper's might think entirely the opposite.

Rutger Zuydervelt - Sneeuwstorm (Glistening Examples). one of the year's best to date. chris b.